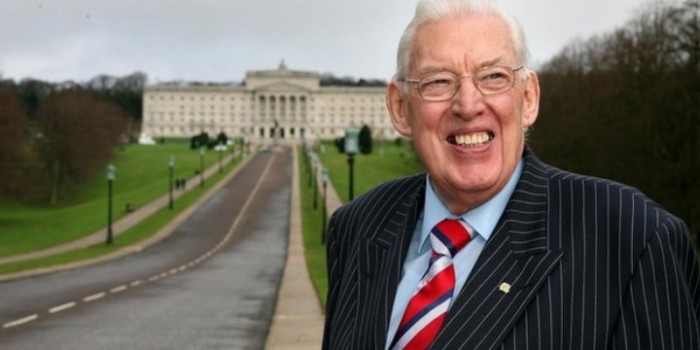 Can one person ever have too much charisma? Or rather, can charisma be used to trigger both bad and good outcomes?

Charisma doesn’t always make somebody fun to be with, more engaging or willing to collaborate with others by tolerating different viewpoints. Quite the opposite.

A high wattage of personal charisma may have socially divisive results, causing rival groups to see the same person as either a saviour or an agitator. In previous blogs we’ve looked at the careers of both Martin Luther King and Nelson Mandela, both demonised for their views by a white majority, yet ultimately accepted as peacemakers.

White majorities have their divisive agents too. Case in point is the Reverend Ian Paisley, a politician-priest and champion of the Protestant cause from Northern Ireland who died in September 2014 aged 88. As one headline writer prefaced his obituary: “Boorish, brutal, but a man of rare charisma.” 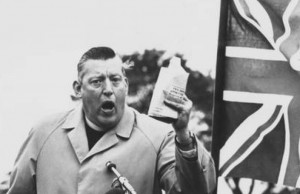 This blog shows how charisma is the key to understanding how one man can, in succession, sustain completely opposing viewpoints or philosophies – and persuade thousands or even millions that he was right both times.

Before his death Rev. Paisley had been a largely forgotten figure, thanks to the years of peace in Northern Ireland ushered in by the 1994 Good Friday Agreement, that brought to an end decades of sectarian violence, bigotry and religious hatred.

But in his heyday the Rev. Paisley gained the nickname as ‘Doctor No’ for the intransigence and stone-walling with which he defended the cause of Protestant Unionists loyal to the Westminster parliament, against Republicans seeking ever closer ties with Catholic Ireland to the south. His oratory and activism spanned the 30-year period called ‘The Troubles,’ during which the British Army struggled to maintain peace, while paramilitary forces from both sides caused over 3,600 killings. Half are still classified as unsolved murders. 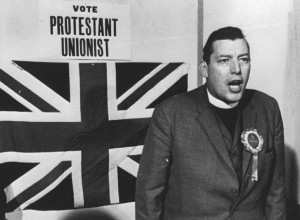 With his battle-cry of “never, never, never” and a style of preaching/campaigning reminiscent of an Old Testament prophet, Rev. Paisley used personal charisma to punch far above his own weight (though his own vast bulk made that considerable).

Relying entirely on his evangelical powers of persuasion, Rev. Paisley founded a church (the Free Presbyterians) and a political party (Democratic Unionist Party). He was successively elected to the Northern Ireland assembly, the European Parliament and the British parliament. He went to jail for organising a march, heckled and shouted down Britain’s then-premier Margaret Thatcher, and even told the Pope to his face he was the “Antichrist.”

I met him once as a young journalist, in 1976. It was my first-ever political interview. He glowered across the table as I nervously switched on the tape recorder:

With no idea what to ask, I timidly remarked: “You don’t seem to have been very controversial lately.”

Silence. Then a volcano of hard Ulster vowels began erupting in slow motion: “I have never been more controversial in my life….”

When the torrent of perfect quotes slowed after a few minutes, I turned off the tape recorder and quietly left.

In terms of mapping this undoubted charisma, a portrait of Rev. Paisley during that divisive era is accurately captured by Communicate Charisma’s own online survey of ‘Great Communicators.’ Respondents visiting our website (www.communicatecharisma.com) are invited to complete a short online questionnaire about how they view the communication style of a memorable person. As well as harvesting multiple views of Nelson Mandela, Martin Luther King, Barack Obama and other celebrity names, we have also collected some views of Rev. Ian Paisley.

The early results are in. The circular map shows how we define the essence of charisma through seven dimensions (7D). The square grid shows an individual’s delivery style or projection profile through two dimensions (2D).

A preacher-politician with unconquerable drive.

Rev. Paisley’s  very lopsided 7D map shows extraordinary amounts of Drive, with a profile that – unsurprisingly for Dr No, is ‘Unyielding.’ What’s also notable is the remarkably low levels of energy dedicated to Collaboration, making him “Independent.” Again, unsurprising considering his formidable intransigence. Within the community he worked tirelessly for, Rev. Paisley was hugely admired. But outsiders see his Empathy levels as very low and his response to others “Impassive.” Again, those seeking to break the ice with Rev. Paisley before starting negotiations, got nowhere. 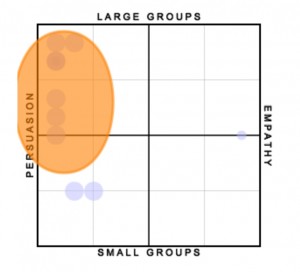 From pulpit to platform: off the charts with persuasive power

Rev. Paisley’s 2D grid shows him to be literally off the charts in terms of persuasive power. From the pulpit or conference platform, he was an orator focused on large groups.

So this portrait represents a snapshot of how this man persists in the public imagination. But is it correct?

True, this man used charisma to carefully craft his position as a hardline Protestant Unionist bigot. But later on, Rev. Paisley also used that very same charisma to turn his whole life story on its head, emerging toward the end of his career as a man of reconciliation and peace. In later life, he sustained a completely opposite position, joining hands with his former enemy.

This extraordinary turnaround came after 2007 when Rev. Paisley, as the leader of the largest Unionist party in Ulster, became the first minister or leader of the devolved regional government. This power-sharing was the fruit of paramilitaries agreeing to finally lay down their arms, resulting in a return to the rule of law under the 2006 St Andrews Agreement. 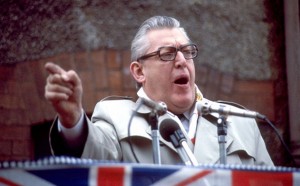 By Rev. Paisley’s side as deputy first minister at Stormont, stood Martin McGuinness of Sinn Fein, the political wing of the Irish Republican Army and a man who has never fully shaken off charges of involvement with the Provisional IRA, a paramilitary force behind many of the killings. Astonishingly, this pair developed an cosy political relationship – so affable they became known as “The Chuckle Brothers.” On behalf of their communities they made the sometimes eye-popping concessions necessary to put The Troubles behind Northern Ireland and consolidate long-term peace. And Paisley, for so long the outsider, accepted a seat in London’s House of Lords as Baron Bannside. 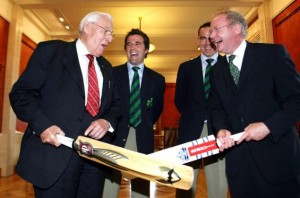 So how, having used his undoubted charisma to whip up sectarianism among Northern Ireland’s Protestant community,  did the very same Rev. Paisley manage to calm things down? Once he’d told Protestants it was acceptable for them to burn down any Catholic home in which they suspected arms were being hidden. Later, he told those very same Protestants they must accept that henceforth the police force protecting them would be jointly run by Catholics.

Rev Paisley explained this Damascene conversion using the tool he knew best: the Bible. Quoting from Ecclesiastes 3 he told crowds: “there is a time to kill, and a time to heal; a time to break down, and a time to build up.” That’s Verse 3. I haven’t found any reference  to him quoting from verse 8, but it’s even more appropriate to Northern Ireland’s fractious past, and its tranquility today : “A time to love, and a time to hate; a time of war, and a time of peace.”

For a lesser politician, explaining such a sea-change would have been impossible. The Protestant community he led might never have built trust and made peace with their Republican former enemies. And yet they did, in no small part thanks to his persuasive power. Just like Martin Luther King, Rev. Paisley used the Bible to explain the inexplicable. “For everything there is a season, and a time for every matter under heaven.”

Logic or reason didn’t come into it: it was charisma that enabled him to convince an entire community that he was right both times. In the end, Ian Paisley was a regional politician without global significance, whose life was played out on the small but anguished stage of Britain’s very first, and very last, colony.  But he did show how a man, armed with no more than a bucketful of charisma, can indeed change history for those around him.