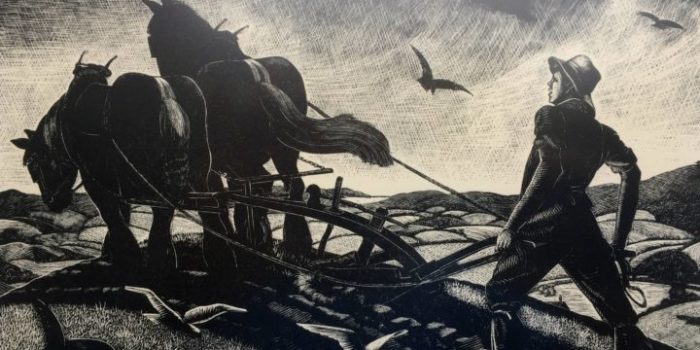 So the white working class bet the farm on Donald Trump, in the process bringing out the *farm-boy deep inside every American male.

In the week since the 2016 US presidential election, much of the focus has been on the tangible policies the president-elect may or may not have promised voters. But Trump’s extraordinary skill in first capturing and then communicating cultural values, thanks to his undoubted charisma, leaves America with a question. What has he awoken?

Months before the poll, Trump had been pressing psychological buttons too deep for pollsters to detect. The Germans call it Blud und Boden (Blood and Soil). A nation defined by its ethnicity, by its toil – agricultural or other – and by life away from its big cities. A backwards look toward origins.

For this was an American rediscovery of blood and soil, in which rural, ranching, regional, rustbelt, redmeat populations heaped their collective hopes, dreams and visions on the shoulders of their candidate. Let’s take another German word and call this population America’s Volk. (Although that just means ‘people,’ it’s charged with other historic meanings too).

Trump has awakened and channelled the American Volk and its values (Second Amendment, Pro-life, plain speaking, anti-elitism, contempt for liberal professionals, the melancholy of disempowerment and exclusion matched by admiration for millionaires, and yes – views of race, religion and gender at odds with what until last week was the new orthodoxy.) People have started calling themselves working class again.

One week on from the tumultuous poll, the reasons “why electors did that” and “how Trump made the sale” have mostly been made clear. The unanswered question remains: “what will the after-sales service be like for Republican voters”?

Or, can the undoubted charisma that Trump demonstrated in his campaign translate into meaningful leadership that addresses bitter cultural fault-lines exposed on polling day?

We’ve been writing regularly about Trump because  for  students of  charisma in communication, he’s the biggest and the shiniest thing to come along in decades.

Fifteen months ago this blog began questioning Trump’s credentials and his charisma.  And four months before polling day, we again questioned whether charisma, or a more narcissistic personality trait, drove his style. And recently, we looked at the social science behind the Trump appeal.

Like him or loathe him, Trump has achieved a feat of mass communication mastery that’s up there with Mark Anthony’s speech to the Roman multitude, Ronald Reagan’s shredding of Jimmy Carter in 1980, or even – whisper it softly – the 1952 “Checkers Speech” that set Richard M Nixon on his way to the White House and then to eventual humiliation.

Operating largely alone but making highly adroit use of social media, Trump gave a Masterclass in how to persuade 62.9 million people to offer him the benefit of the doubt and how to force them to “listen to their gut” – all by establishing an instant rapport that drove voters to trust a man with no experience of or qualifications for high public office.

You can rail against demagoguery, populism, or whatever you like. Fact is, Trump had the charisma to channel, amplify and give voice to those long-disregarded dreams. He did a brilliant job.

For whatever his many shortcomings, Trump offered one singular value: that of being the Outsider and antithesis of Washington elites. He was the one chosen to “drain the swamp,” “stick it to the Man,” or in mythological terms, to drive the moneychangers from the dirtied Temple of the American Dream.

Indeed, voters made clear they either didn’t care about Trump’s gross behaviour or tactlessness – even regarding these as additional qualifications for a bona fide Outsider. Trump’s own vision and beliefs, meanwhile, were out there for all to see and judge – especially now he’s declared he’ll take only US$1 for his presidential salary.

What Trump has going for him is a relentless optimism based on the same fundamentally Romantic narrative that enlivens all revolutions, whether they succeed or fail. And whether they come from left or right. It’s a heady mix:

The future will be better than the past; the small can overturn the strong; miracles do happen; we will not destroy one failed system only to replace it with a worse; nothing is impossible. There is no going back..

Whether or not you regard it as sickening, Trump played on this Romantic narrative to seize the White House with a display of rhetorical legerdemain that was truly magical. His favourite words are “beautiful” and “huge.”

Yet many unanswered questions remain: He conjured this victory out of thin air thanks largely to his communication mastery. Now, does he have less fiery communication skills to consolidate his hold and build a government with both legitimacy and the chance to construct a legacy? Or is he just an eternal salesman – all transaction and no relationships?

At stake is whether those very same qualities of resolute drive, soaring self-assurance and unshakable persuasion that the president-elect used with such success to sell himself to the American people, can be moulded to another purpose after he enters the White House next January 20th.

Other leadership qualities will be needed to manage voter expectations and calm inevitable frustrations during the long years it will take the president-elect to deliver on his campaign promises – especially if many of those are destined to be quietly forgotten.

Reaching out beyond the now jubilant Republican party will demand the voice of real political collaboration from the new president – not the easy bonhomie of commanding teams of apprentices playing business games, but the kind exhibited by FDR in his ‘fireside chat’ radio broadcasts of the 1930s.

Empathy will be needed too, if the losers are ever to be integrated into this still-divisive national project. Even as middle America exults in its victory of blood and soil, its thinner-blooded counterparts on the slender, Hillary Clinton-loving coastal crusts – neo-liberal, metropolitan, hipster, progressive America – sent up a wail of anguish at the rejection of both their candidate and their culture.

Communicating the episodes of bad news, the frustrations, the inevitable compromises and the unwelcome moments of powerlessness before events, will test the biggest of all the many unknowns about the 45th president of the United States.

Does Donald Trump have any values? He channelled and amplified white working class values into a Romantic archetype that’s light years from his own metropolitan persona – so what does he actually believe in himself?

History teaches us that when leaders use charisma without any corresponding values in order to awaken the national Volk, these are dangerous times for all.

*The farm-boy engraving at the top of this blog comes from Southern Harvest, a record of a 1942 journey through the rural American South by English artist Clare Leighton. 70 years ago she wrote what might have been a strategic map for the Trump campaign: “It is not in the cities that the true America is to be found. It is among the descendants of Daniel Boone in the mountains, or the German farmers in Wisconsin, or the men who grow tobacco in North Carolina; it is discovered in that great Negro who sings as he picks his cotton, or that woman who harvests her fruit on some lonely farm in the Middle West.”