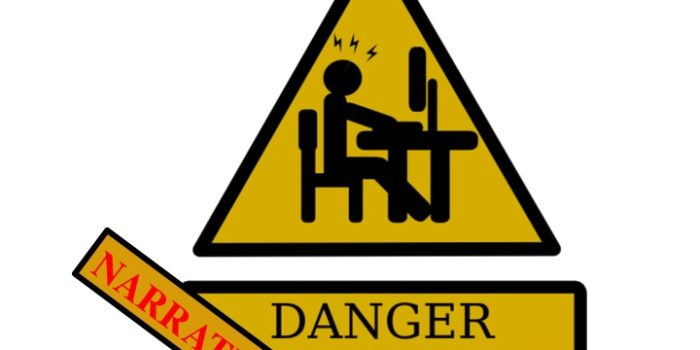 Once upon a time, narrative was the word used to describe the compelling storytelling that garnered Oscars, made box-office hits, churned out literary page-turners and even underpinned brilliant business plans.

But  definitions change: These days the very same word is used to describe something that’s simply not true. Increasingly, narrative means a sequence of facts or circumstances crafted by narrator for the purpose of “not allowing the facts to get in the way of a good story.”

In our story-drenched world, narrative now signifies the way we interpret an underlying truth, not necessarily the facts themselves.  At best that involves some self-deception, while at worst it’s deliberately misleading – or a barefaced lie. Our earliest childhood learning is that “story-time” is quite different from “true life.”

This is important for leaders who – tempted by now-fashionable purveyors of the commercial storytellers’ art – believe they can easily raise their influence and personal credibility with narratives built around the Hollywood scriptwriters’ nine-point story arc or Joseph Campbell’s The Hero With a Thousand Faces. There’s a lot of tempting talk about tapping into well-worn pathways in the collective unconscious.

Yet beware narrativity, and above all beware the siren call to make public what is only the first draft of a new truth, one that can only be made real by the willing collaboration of future events far beyond your control. Events don’t follow a script: Napoleon would famously only describe his battle strategy well after a victory was won.

So making promises based on the way things are “supposed” to turn out, creates hostages to fortune. The alternative approach is to make a pitch base on character, rather than the implication that future events are somehow controllable. Making use of our innate charisma and the elements of which it’s made up – including Vision described below – is, we contend, the authentic leadership approach.

That’s why Communicate Charisma uses tools and strategies to help leaders of every kind to influence people in ways that change minds or wins hearts. Character and communication style are vital ingredients in getting others to accept or follow our own plans.

A Story Too Tall to Swallow

By contrast, having our lives flooded with stories  based on narratives that  just don’t pan out, means that we’ve learned to distrust storytellers. Not just in politics or business, but much closer to home. 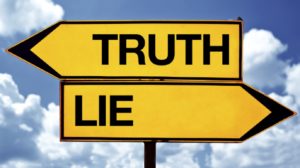 How often do the facts get in the way of a good story?

Think about a friend or business acquaintance with a “self-made man” persona based on a history of childhood struggle and unloving neglectful parents – only to see that myth unravel should a chance encounter with a sibling reveal the truth of a stable, happy middle-class upbringing.

Or a neighbour whose public protestations of politically-correct social positions unravels when it’s revealed that he (and it can sometimes be she) refuses to share even basic childcare duties.

Of course, the narratives earning our deepest mistrust are public and political. All too often, leaders campaign on weighty promises that are honoured in the breach.

President Donald Trump campaigned effectively for the US presidency on an isolationist narrative, adapting John Quincy Adams’ 1821 maxim that America: “goes not abroad, in search of monsters to destroy.” 100 days into his mandate, he has done exactly that in Syria and North Korea. (You can read  articles here and here analysing  Trump’s use of charisma).

In Europe, the purveyors of nationalist doctrines promising a return to simpler days of frontier controls and local jobs for favoured sons of the soil, are finding the genie of globalisation impossible to put back into the bottle. The domestic turmoil already caused by the UK’s 2016 referendum vote to leave the European Union, will be as nothing compared to the resentment ahead, when the ink on the final settlement reveals the bitter pill Britain must swallow as the price of having accepted the Leavers’ deceptive narrative.

No wonder, then, that distrust in political narratives the world over has deeply undermined the credibility of opinion polling: if candidates can lie to the public, then the public can also lie to pollsters.

So, if leaders shouldn’t use speculative narratives, or make promises over which they have no control, what can they still do to fulfil their basic purpose, which is to focus energy and galvanise support for goals that benefit the public good whether in time of peace or war?

For example, if the CEO of a disruptive tech startup with first-round funding newly in the bag shouldn’t use the “Rags to Riches” Cinderella myth to describe a coming tussle with Facebook for market share, then what can he do?

Narrative relies on inductive logic to create what looks like a compelling pathway to the future, loosely based one of two ideas.

In both cases, the fundamental “ask” of the narrative is passive: “believe in me.” Narrative also makes promises about outcomes that are vulnerable to future facts.

The promise of US isolationism must now dissolve to confront Kim Jong-un: Brexiteers’s naïve plans for the UK ‘having its cake and eating it too’ must bow to an implacable EU stance.

And Silicon Valley is certainly full of dead Cinderellas – from MySpace, Friendster, to GoogleBuzz and more. The giant-slaying narrative didn’t work for any of them.

By contrast, Vision  helps our imaginations to  transform the known and familiar into  something extraordinary. 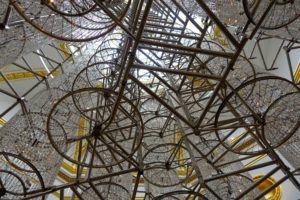 More than just a way of getting from A to B: Visionary bicycle sculpture by Ai Wei Wei

Leadership strategies based around future possibilities that followers can turn into reality through their own collective actions, will always be the more powerful than those based upon acceptance of any predetermined script or narrative.

Vision is one of the Seven Dimensions of Charisma, as described elsewhere on the Communicate Charisma website. You can read articles here, and here and here.

Let’s be very clear: stories are essential  to every life and every culture. Narratives aren’t bad, or necessarily untrue. But when it comes to public persuasion, they are an increasingly a devalued currency – precisely because we are now so conscious of them.

So “Narratives at Work” has become a kind of warning  for us to step around the ladder on the sidewalk, just in case something falls on our heads.