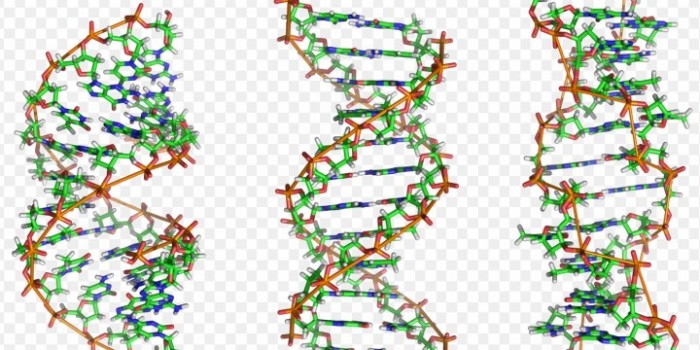 Do you believe it’s possible to boil someone’s personality down to a mix of just four letters?  If the answer is yes, then is it inevitable that in conversation, someone with an ENFP personality type will outshine an INTP?

We all love the security that labels bring us – but when it comes to human personality, they can be restricting too. Which is why there’s a still a place for mapping qualities we all understand intuitively, like empathy or self-assurance.

Perhaps an understanding of these qualities – and a way of visualising  them – will get to the heart of the matter quicker than a four-letter acronym that needs to be unravelled for us by a professional. By contrast, visual symbols like the one below  have immediate impact. 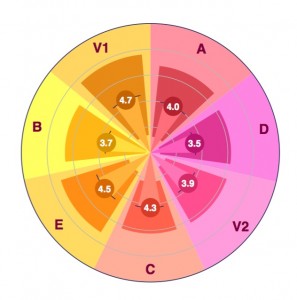 Readers who have already matched themselves with one of 16 psychological types of the Myers-Briggs Type Indicator (MBTI), will be curious to know whether this also defines the amount of charisma they can show the world. It might be tempting to consider that those likeliest to have the extra “wow factor” that we know as charisma, will also have profiles characterised by extroversion, intuition, feeling, and perceiving.

These attributes form one half of the four dichotomies first identified by the Swiss psychologist C.G Jung, and which in 1943 were used by Isabel Briggs Myers and her mother Katharine Briggs to construct MBTI. Jung initially based his approach to personality on mental bipolar dimensions (dichotomies). These were Sensing-Intuition (SN) and Thinking-Feeling (TF). 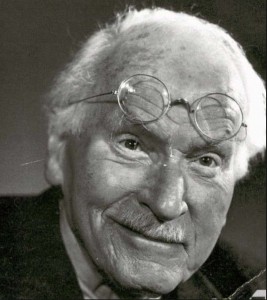 So how does Communicate Charisma compare with the much older methodology, which in its authorised and unauthorised formats has been taken by many millions of people, has generated around 1,000 books, and is still the “gold standard” in psychometric testing? 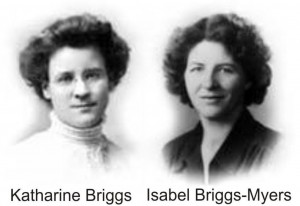 The founders of MBTI system

First, Communicate Charisma is a newcomer with more limited goals, focusing solely on the way each individual projects his or her essential energies when communicating, resulting in the effect we know as charisma. This is a variable mix of self-assurance, beliefs, collaboration, drive, empathy, values and vision. 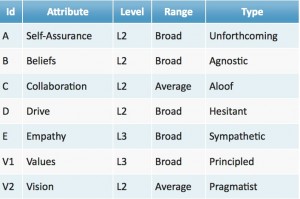 Second, charisma is not a personality type. It is less about being – and more about doing. Crucially, charisma is a feedback mechanism. It is how we experience the other that counts: do we perceive that person as charismatic? So it needs to be measured using quite different yardsticks to those used to score personality in its innate form. Charisma is the “compelling attractiveness or charm that can inspire devotion in others,” helping lower people’s resistance to accepting ideas and so raising influence.

Thirdly, similarities between the two methodologies are limited in scope because they are looking for different things. They have a distant common ancestor in the work of Jung and his 1921 study Psychological Types; they both use a self-assessment questionnaire as a “personal MRI scan.” And neither are personality tests per se but instruments designed to aid insight or personal development, and for which there are no right or wrong answers.

There the similarity ends.

The purpose of Communicate Charisma is to help users recognise and then remove roadblocks to effective communication, which is an important life success factor. Rather than focusing on “what to say” or “how to say it,” we believe we can best serve people by showing them the authenticity of “who to be.”

You can take the test right away by clicking here to visit the Communicate Charisma website and following the instructions.  By way of a warm-up, before you  answer questions about yourself you’ll be invited to state your views of a “Great  Communicator.” (First you will need an authentication code available to those who plan to experience our workshops).

While the system acknowledges Jung’s core insight that observable behaviour is a manifestation of shared underlying archetypes of personality, Communicate Charisma is not based upon a fixed or limited number of personality types. (In MBTI the total* is 16, this being a multiple of the four dichotomies identified by Jung).

MBTI and similars use these 16 four-letter acronyms

Instead, Communicate Charisma follows Jung’s original assertion that “every individual is a new and unique combination of psychic elements.” (The Development of Personality, 1954). Likewise each person’s charisma is composed of a mix of attributes that’s unique to them.

So the Communicate Charisma methodology works from a basis not of 16, but 144 distinct levels. Each of these can be further combined to produce as many variants or possibilities as there are individuals to take the self-assessment test. We haven’t done all the math, but the range is huge.

Perhaps useful comparison can be made with the double-helix model of DNA first revealed by Crick and Watson in 1953, and coincidentally also based on a four-letter code. Although there are just four building blocks or nucleobases in each DNA strand (guanine, adenine, thymine, and cytosine), the range of combinations across the 23 chromosome pairs in the human cell creates a genome or genetic information set of three billion base pairs. 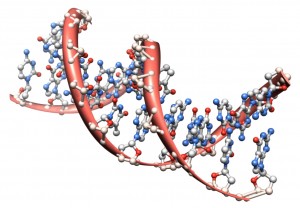 The Communicate Charisma self-assessment test generates two distinct types of visual plot, offering 100% personalised and unique results. It is an inclusive, rather than a reductionist system such as those that may classify people according to types of animal or hero.

Take the Seven Dimension Essence Plot. First of all, this wheel-like graphic with wedge-shaped zones shows how the overall energy a person devotes to communication is divided between seven zones or dimensions. Next, the mean energy level shown in each of these dimensions will vary between five different levels, depending on the distance from the centre of the plot. Finally, the test also shows the range a person may exhibit in each of these dimensions, permitting them greater or lesser flexibility in adopting other behaviours. So there are 105 distinct fields here. 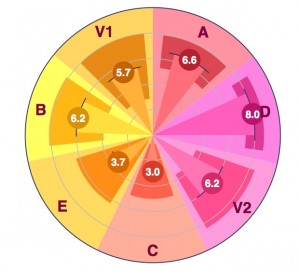 Now add the Two Dimension Projection Plot, which forms part of the results of the self-assessment test. It is conceived as a standard grid onto which an ellipse of variable size and shape is projected. While the position of the main ellipse gives a unique graphic representation of the responses, subsidiary ellipses may provide indications of any gaps between a person’s real or imagined communication style. So there are 39 distinct fields here. 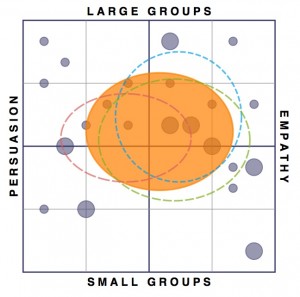 All in all, Communicate Charisma is the antithesis of a cookie-cutter testing tool. It provides a visual plot that’s hugely flexible and sensitive to individual personality, without being limited by a reductionist system or fixed theory. We believe it truly respects Jung’s own words: “We miss the meaning of the individual psyche if we interpret it on the basis of any fixed theory.”

Just as MBTI was conceived to make the insights of type theory accessible to individuals and groups, so the objective of Communicate Charisma is to make use of clear visual symbols to help individuals map, measure and manage those communications skills or assets that might otherwise remain undetected or unrecognised.

By projecting our communication type in a way that’s both intuitive and simple without being simplistic, Communicate Charisma plots instantly show us our stronger and weaker sides. 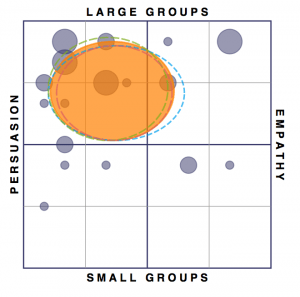 This chart shows strong preference for public performance and persuasion.

The headline conclusions are immediately visible online in the Summary Report available to users who have completed the self-assessment test that you can find by clicking here. Just click on the field named Self-assessment under the Take a Test tab.

More detailed information can only be found in the full Self-assessment Profile — a printed report that is delivered personally to those attending Communicate Charisma workshops and training events, which will be coming to cities around the world during 2014.

To add further depth and perspective to the visual representation, the methodology also uses an avatar or descriptive title to help identify each zone. On the 7D Essence Profile, each one of the seven dimensions has five descriptors for the five energy zones within it, resulting in 35 avatars. As described above, each of those avatars is further qualified by the range or flexibility achieved, in an explanatory text.

Furthermore, the 2D Projection Profile generates another 10 avatars or descriptive titles to help envisage where a person sits on each of the two axes. Finally, because we all exhibit a mix of these two axes, the Combined 2D profile provides us with a set of nine descriptive titles that serve as snapshots showing exactly how each of us goes about the business of communication. All in all, this gallery of 54 avatars or personality types provides a comprehensive yet clear framework allowing us imaginatively perceive the impact we have on others.

Add in the visual framework from the 2D and 7D Plots, and Communicate Charisma provides what we believe is a forensic and comprehensive analysis of the way every person consciously or unconsciously seeks to influence others through communication. 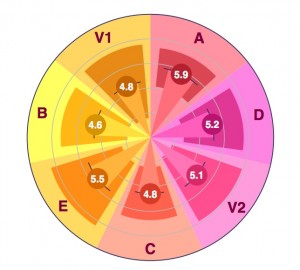 How an extraverted, intuitive, feeling and perceiving personality might look.

And by the way – this writer is an ENFP.

To find out more about the Communicate Charisma method and what it offers you please visit: http://www.communicatecharisma.com/

* In addition to defining one of the 16 personality types with a four-letter code, MBTI and similars include bar charts in test results showing the percentages of the eight individual traits.