Ever wondered if there is a colour associated with success in business?

Could use of colour really influence the fortunes of companies, and might it be true that companies of similar size, industry sector or even geography tend to use the same colours in their corporate identity and branding? The answer is yes, yes, and yes.

Putting these answers together, might we conclude that certain colours contribute a more charismatic  air to the products and the  logos that they grace? By using the word Charisma  I mean that  people tend to lower the barriers of disbelief when they see logos of a certain colour, and that people have a greater tendency to take on trust what they get from a company with a logo of a certain colour.

Let’s put it to the test…

The evidence comes in a beautiful and elegant piece of graphic design work I stumbled across at the 2012 degree show of students from the Central St Martins School of Art in London.  I was blown away by a beatifully-produced display from  Kwang-Hyun (Sean) Ahn from Korea.  The work of his one-man band called Akha is visible  on http:cargocollective.com/ahka1203.

This work builds on some old ideas. The artist Wassily Kandinsky, during his time as a teacher at the Bauhaus art school, experimented with associations between pure colours and shapes back in the late 1920s. Since then, creating systems has become a bit of a graphic designers’ holy grail. 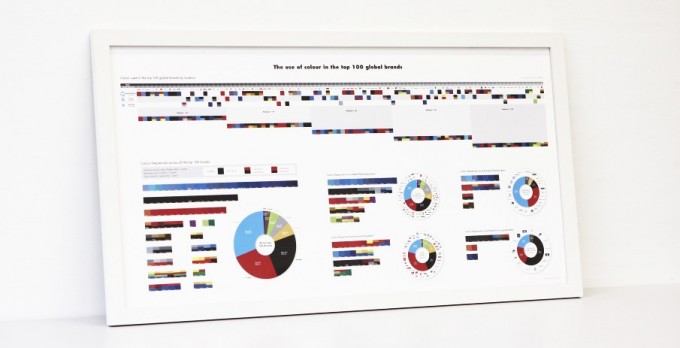 The idea is startlingly simple: take the InterBrand top 100 list of the world’s most valuable companies. Then take a PanTone colour chart and map each logo against the businesses. Above is a list of the top 20 brands and their choice of colour. It also shows how colours vary little across the geographic regions where the world’s largest businesses cluster.  Says Sean: “the  aim of my project was not to look for the power of brands. I was just looking at the most-used colours.” He points out that  colours have different significance in different cultures. Also, fashions change. Once upon a time the apparel industry avoided green, due to some long-forgotten episode in France. Now “green is good.”

You’ll already notice that blue, red and black predominate in the colour palette of success (as defined by InterBrand). But by how much? The analysis shows that blue gets a full 30% of all top logos. Closely followed by red and then black. 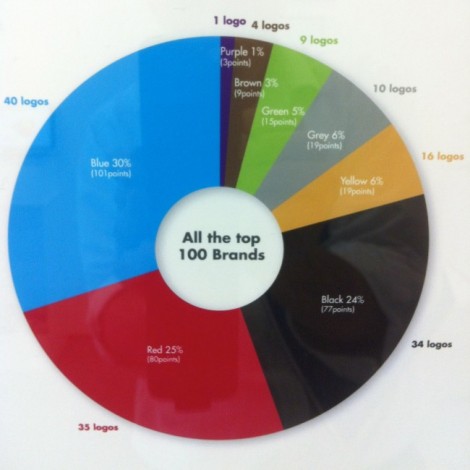 OK. So we know that’s a generic choice of colour favourites. But how do, say financial service companies choose their colours? You guessed, it: they’re just as conservative as you would expect. More than half of all financial services companies use blue in their logos! 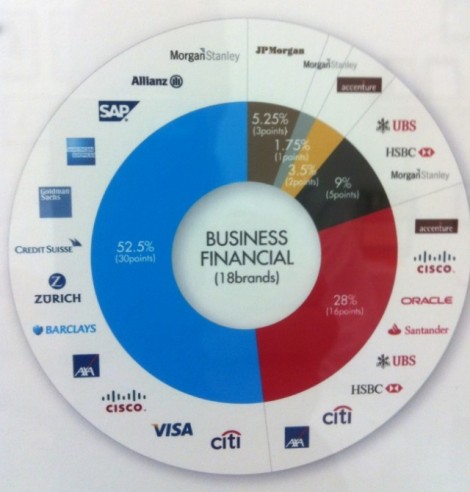 As we might expect, other industries are a bit less colour-conservative than  finance.  How about  the world of fashion, for instance? You’ve guessed it: the world of fashion, sport and luxury goods goes for  much more red — in fact the same amount  of red as blue (while in finance, blue outranked red  almost two-to-one). But the real winner is black. Black is  cool, whether you are Burberry, Louis Vuitton, Armani or Burberry. 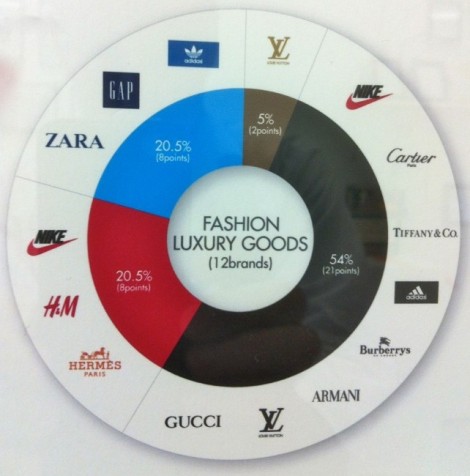 Then what about the word of tech? We all know Apple has made a hit out of  its unbearably pure whiteness. But what about others? The categories get a bit catch-all here,  because  it’s hard to put Shell,  Apple and EBay in the same category for just about anything. But the basic rule of thumb still holds — red, blue and black  take the winner’s podium once again. The only significant outlier here is Yahoo, which has broken loose with a purple logo.  This, Sean says is courageous: if Yahoo had wanted to  play safe it should have chosen blue. 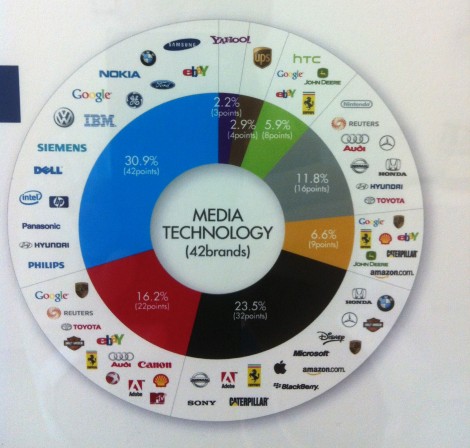 The  colour-wheel below frustrates our expectations a little in the world of food  sales and food marketing. Perhaps  you’d expect to see a lot of green?  Well, despite the fact that  there  is no black or blue food, and red suggests meat,  it’s the same old combo that wins out. Use of red may stand to reason in fast-moving consumer goods, where it’s vital to catch the shopper’s eye and engage his/her emotions quickly. 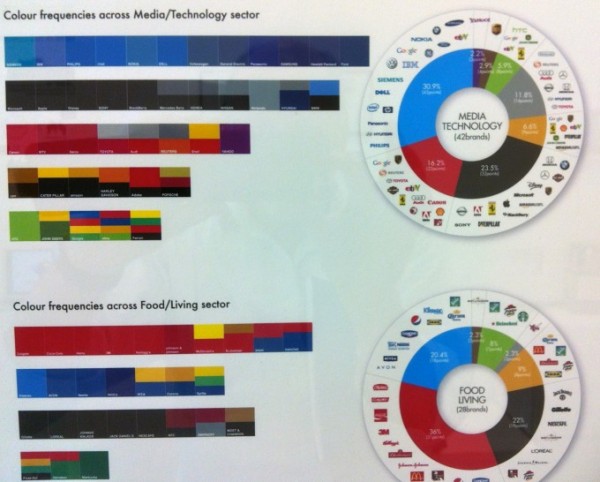 In fact, red is the dominant colour, with  Coca-Cola, Kelloggs and McDonalds logos  helping make the food section  predominantly red. Hold that thought… McDonalds? Red? What happened to the Golden Arches? In fact… let’s unpick this methodology a bit. Citi is red AND blue. Nike is red AND black.  Ferrari is yellow, green, red and black. Google’s rainbow logo is everything!

So does this mean anything …..or are we just looking at a clever  graphic design student and his work which needs to be tested in the real world of business? How did the researcher come to his conclusions? Here’s an explanation of the weighting that Sean (Kwang-Hyun Ahn)  used. This is where it gets conjectural — he’s awarding extra points to logos that are predominantly of a single colour.  (A single colour logo gets 3 points,  while  a logo with  2 primary colours and a  secondary colour gets 2 points. That of course creates a slant towards strong, simple  colour patterns — and leaves the chameleon-coloured folk like  Google or EBay out on a limb.) How come, then,  Google is  such a valued and trusted brand? 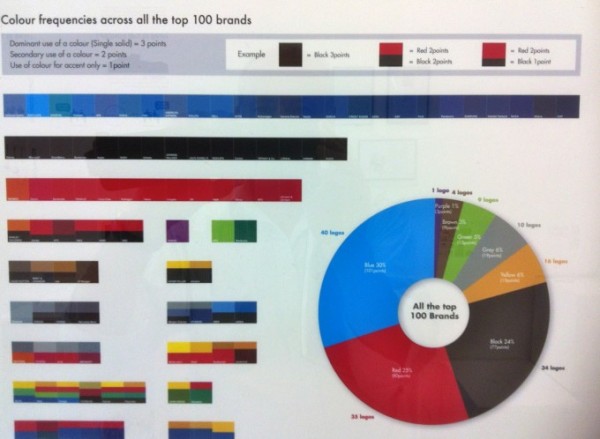 To answer the first question, he conducted a small experiment on himself, and then on 10 other volunteers. Each person’s  heart rate was recorded while resting. Then  the heart rate was recorded while  different colours were shown on a screen for 30 seconds.  In Sean’s case, his  resting heart rate of  82 beats/minute went to 86 with red, but  dropped back to 83 beats/minute with green. “Warm colours increase our heart rate and  blues/green cool  colours slow down our heartbeats,” says Sean. Of course, such a tiny sample and the absence of weighting for age etc, limits the value of the  experiment. Somebody should  fund him to do more.

His other experiment  shows that people do associate  blue with finance, red with fast moving consumer goods, and black with fashion. They also associate logos  having straight edges and rectilinear design with finance,  while  linking  curved shaped logos to  the food and living industries. Meanwhile  fashion industry  is readily associated with typeface type logos. In fact, people tend to believe unknown logos are associated with finance if they’re blue, and likewise for the food industry if they’re red.

It  turns out, of course that this young man  isn’t the only one drinking from this particular cup. It’s a billion dollar industry.  And seems like a billion bloggers are at it too. Colorizing your brand is the name of the game. Every entrepreneur should know the significance of colours to his or her brand. At the whackier end, there are even people who believe that logos  with power (regardless of their colour) all incorporate Masonic secret symbols. Here’s one example of a subjective  ”colour matches mood” type table. 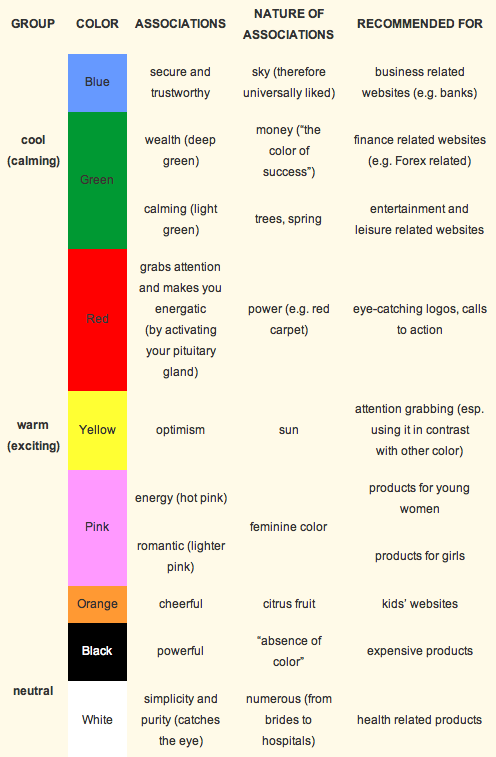 Whatever their colour, symbols have power — and the modern logo merchants who serve  big capitalism know that very well. All this is just one more aspect of the power of story and the influence of narratives on brand storytelling.

I’ll leave you with a question. If people can exhibit Charisma, then why not brands as well?