For millennia, the business of public persuasion by princes, politicians and those in power, has depended on a deliberate construct based on the rules of oratory and rhetoric. Building up a chain of logical argument by means of tested ideas and supporting facts, supplemented in turn by colourful images or examples, has been the way to change minds and gain influence. That meant putting pen to paper – and then reading the results out loud.

Then along comes Trump.

Although it’s been carefully honed and polished through thousands of hours in the TV studio, Trump’s speaking style is designed to come across as wholly spontaneous. Mostly, Trump rejects the “spoken word,” in favour of the “spoken thought.”

The effect for listeners is that instead of the traditional delivery of pre-prepared words and ideas, Trump is speaking thoughts as though they had that instant been born in his brain. Listeners get the endorphin hit of feeling “he’s saying this fresh just for me,” rather as they do when watching live stand-up comedy or listening to rappers perform.

Witness the replacement of yesterday’s elitist communication style by a soundbite-based, Twitter-abbreviated, Google-browsing thought-process brought to perfection. This affects every politician,  every PowerPoint presentation – and every corporate keynote speaker too.

Constructed arguments that had appeared clear and intellectually robust before, now run the risk of sounding contrived or false. If former President Barack Obama were to again take the stage with his soaring rhetorical set-pieces, his words might sound artificial or contrived. Even old newsreels of John F Kennedy – now seen though the lens of Trumpian communication – today seem wooden and dull.

It’s a made-for-television construct of course. But the rambling mix of repetition, free-association, elision of meaning and disregard for grammar, comes across like a spontaneous conversation and feels authentic and therefore true. Oft-repeated keywords like “huge” and “beautiful” colour the mix. Rather than “speaking in tongues” like some biblical prophet, Trump has learned the feat of speaking in Tweets.

So what should every other politician or would-be conference speaker do now? Is it time to ditch that prepared speech, fire the speechwriter, dump the teleprompter, and try to embrace this demotic anti-style? Is it time to ‘go native’ by adopting street argot over clear grammar, and paying homage to rap rather than rhetoric?

The answer is No. Don’t imitate Trump. What works for him, won’t work for you.

Lets not forget that the new US President’s “America First” inauguration speech has already launched a fleet of brilliant lampoons, from Saturday Night Live’s Alec Baldwin though the hilarious “Netherlands Second” and “Switzerland Second” videos. Any figure from the corporate world seeking to adopt this “in your face” style will hitch themselves to Trump’s own fortunes – and likely fail into the bargain.

Of course, the “Prepared vs. Spontaneous” speech debate isn’t one of polar opposites.

Setting aside that occasion in Charlotte, North Carolina when he publicly dismantled his own teleprompter, Trump on formal occasions does indeed dutifully read out Chief Strategist Steve Bannon’s prepared speeches. His “America First” inaugural has been endlessly pored over for its austere content. And during the election campaign there were famous scenes where Trump handlers sought to stop him going “off piste” by abandoning the scripts they’d prepared for him, instead adopting his crowd-pleasing riffs. These ‘ad libs’ may have won the election, but without policy, they won’t retain the White House.

On the other side, speechwriters have not been slack in using theatrical arts to mimic the rhythms of natural conversation, making the “spoken word” more and more indistinguishable from “spoken thought.” Check out the delivery text of many modern formal speeches and you’ll notice the dots and dashes, the ungrammatical cadence of sentences, the repetition. Think of Winston Churchill’s wartime radio speeches and their telegraphic style.

And there’s an Achilles heel to “spoken thought,” which is a result of the limited brain storage power of speakers who are not trained actors used to learning and retaining long scripts. For most of us, “spoken thought” can’t sustain a sequential, piece-by-piece argument that builds into a complete logical construct that clinches the argument once and for all.

What happens to us when we try “spoken thought” is exactly what happens to Trump: When we lose the plot we start riffing, we repeat, we circle back, we stumble, and we forget key points, and then we bluster. And unless – like Trump – we’ve been trained through years in a TV studio with invisible earpiece prompts from the producer to pull us through, we’ll make some big mistakes.

Don’t forget the “spoken word” has its own Achilles heel too: Prepared speech has long been plagued by dullness. Today’s confrontational politics show us that the days of the elite speaking to the elite over the heads of electors are finally done with. The pitch needs pizzaz, sparkle and an ear for the authentic tone of the street to enliven it – and few can deliver that without some improv theatre training, reality TV show time and other stuff they don’t teach in MBA school.

There’s a temptation – to which many have already succumbed – to dismiss Trump’s delivery style as shallow attention-grabbing whose effect won’t last. But it will surely endure for one simple reason: Trump also has charisma by the bucketload.

You  cann  find  articles we’ve posted previously on  Trump’s charisma, its nature and  the use he makes of it,  by clicking here, and here and here. We even plotted what Trump’s own charisma map might look like: 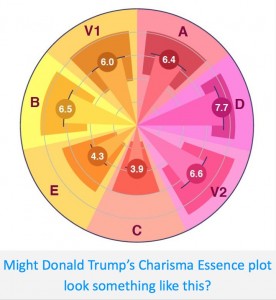 Forget “what to say” (content); forget “how to say it” (delivery) and instead focus on “who to be.” (That’s the charisma part). It’s the power to influence people and to win their approval or admiration, getting them to do things they wouldn’t otherwise have done (voting for an outsider with no political experience).

Whether or not you admire Trump’s approach to politics, don’t be tempted by his delivery style unless you are – as he is – truly in touch with the force of your own charisma.

To discover the elements of your own charisma, why not take our simple online test? www.communicatecharisma