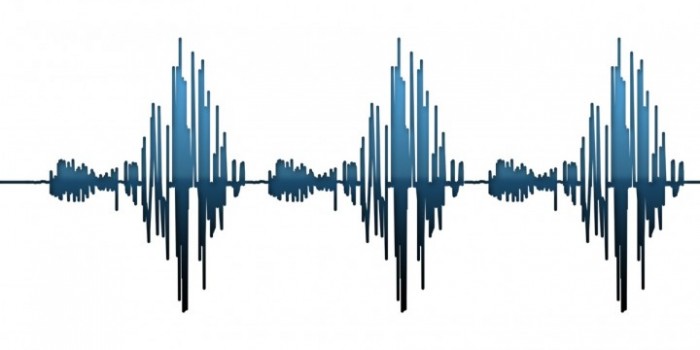 We all know effective leaders make use of charisma to raise their influence.

But exactly how does charisma work? It’s a famous truism that more than half the power of human communication is independent of message or content, yet the expert agreement stops there.

Are charismatic leaders deliberately using non-verbal or body language? Are they consciously  influencing us through subtle variation of their voice tone? Or does a truer,  authentic charisma style ensure that a speaker’s personality shines through his or her narrative?

Charisma is the “extraordinary quality” we sense in others, according to the sociologist Max Weber. Yet unless we sense the effect is authentic and holistic, we’re unlikely to feel compelled to follow such a person or accept their charismatic authority.

Understanding the way we project charisma brings us an important step closer to mapping and measuring the essence of charisma, which is the focus of Communicate Charisma and its unique methodology.

The central insights of Communicate Charisma are based on humanist psychology and share common ancestry with long-established personality typing methods such as MBTI, which work for the famous and non-famous alike. You can read an article about this by clicking here.

In previous artcles we’ve tested the proposition that charisma is about body language. The  adoption of standardized “power poses”, such as arms akimbo, or thrusting one foot forward as advocated by experts such as Harvard Business School’s Amy Cuddy, suggest that ‘charisma leadership tactics’ may fail the authenticity test.  You can read another article about such learned charisma behaviours by clicking here.

Now it’s time to subject to analysis the proposition that charisma is experienced through voice tone.

New research seeks to show that listeners experience charisma  through the tone and frequency of political leaders’ voices. It also shows that small changes can dramatically affect the way people are experienced by listeners, at least in the laboratory. The research comes from the University of California. 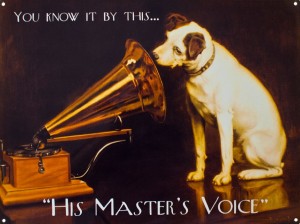 Rosario Signorello, a post-doctoral expert on phonetics, voice quality and laryngeal biomechanics from UCLA’s Bureau of Glottal Affairs, has been researching the charisma effect of Italian, French,  and Portuguese speaking politicians.

You can read news reports about the research by clicking here, and clicking here. You can see an earlier version of his paper, which was previously delivered to a conference in Amsterdam in 212. It can be downloaded via the www.academia.edu website or by clicking here.

Signorello presented his paper to the Acoustical Society of America (ASA) in October 2014. Entitled “The Science of Charismatic Voices,” the research proposes that whether leaders are perceived as authoritarian or benevolent may depend  on the frequency characteristics of their voices. 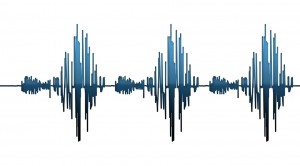 Voice power: the secret of charisma?

Signorello used 260 student volunteers to listen to speeches of leaders from Italy, France and Brazil that had been “delexicalized” or decontextualized so content would not influence their judgement. Volunteers matched the voices with 67 adjectives such as dishonest, scary, dynamic, and fair.

What he found was that leaders can manipulate voice quality to convey different types of charisma. Italians, for instance, associate authoritarian leadership with gruff, low-frequency voices that simultaneously have a wide range of vocal pitch. France, meanwhile, associate higher-pitched voices with more competent leadership. François Hollande and  Nicolas Sarkozy both have higher pitched voices.

In Brazil, the famously gravelly voice of trade union leader-turned President Luiz Inácio Lula da Silva, helped him secure two successful terms of leadership. Coincidence or not, Lula and his chosen successor Dilma Rousseff (recently re-elected for a second presidential term) have both suffered from bouts of throat cancer. 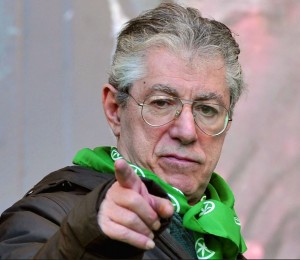 Signorello’s research show listener perceptions can change as voice characteristics change. Signorello cites the case of Italian politician Umberto Bossi, leader of the Northern League and a fierce critic of what he called “Roma ladrona” (thieving Rome.) Southerners and immigrants were also tongue-lashed during his charismatic, raucous and fiery speeches. In 2004 Bossi suffered a stroke (AVC) that impaired his voice. Signorello’s research showed listener perception of Bossi before and after his stroke changed dramatically.

The research used two scoring sets: one is the effect volunteers sensed, and the other tonal  characteristics of voice. Effect ranged between authoritarian/dominant, or more benevolent and competent. The other scale ranged between – wider or narrow range of pitch control, and lower or higher fundamental frequency (FO).

To make these conclusions clearer, we’ve superimposed the changed perception of Bossi’s charisma tracked by Signorelli’s volunteers, onto Communicate Charisma’s own Two Dimension visualisation of how charisma is projected.

Anyone who completes a Communicate Charisma online self-assessment will receive both a two dimension (2D) and a seven dimension (7D) graphic of their own charisma. Furthermore, each person contributes an assessment of a famous communicator, so contributing to our growing archive of public profiles.

Our 2D model is based on intuitive, easy-to-follow assessment of communication style. Does a leader influence most using persuasion, or using empathy? Does he or she achieve more powerful effects over large groups, or exercise more intimate appeal?

Figure 1. shows how the charisma projection profile (defined by the orange ellipse) can vary significantly between individuals, as a result of different keyword choices in their self-assessment.

Broadly speaking, the Communicate Charisma methodology shows that individuals whose ellipse occupies the top left corner of the 2D grid use a more authoritarian and dominant style based on persuasion. Those with ellipses located bottom right, will use a more intimate and benevolent style based on empathy, as illustrated in Fig 2. 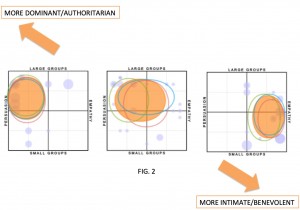 Umberto Bossi never completed a Communicate Charisma online self-assessment. But  based on   analysis of hundreds of our 2D maps, we postulate he’d be yet one more politician occupying the top-left hand corner. Likewise, the way listeners perceived him after his AVC is very characteristic of  a figure occupying the right-hand field of our 2D chart. 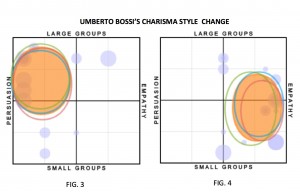 To be clear: we’re making a comparison between the real findings of Signorelli’s research on Bossi, and the likely composite assessment of many individuals completing Communicate Charisma’s famous communicator online assessments of Bossi both before and after his AVC. Yet our comparison remains a very valid exercise for showing how charisma really works.

In his research Signorelli characterised Bossi’s effect on listeners as authoritarian and dominant. Fig 5 shows the perception, while Fig 6 shows combination of  vocal  characteristics that created that perception. Before his stroke (AVC) Bossi had a low average of fundamental frequency, with a wide pitch range and normal modulation of the pitch contour. 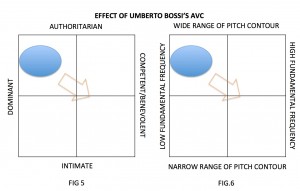 Figure 7 tracks the change that took place making  the Italian politician be seen as “a benevolent and competent leader, which is very different from the authoritarian perception” according to Signorelli.  Fig 8 shows shift in vocal terms. 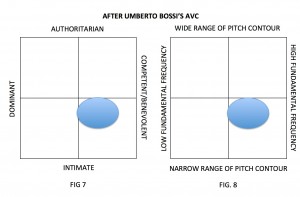 What’s clear is that although the UCLA research is based on acoustic parameters and not on personality projection as is the case of the Communicate Charisma word-based self assessment, there seems to be a significant corroboration.

Nevertheless does the vocal route tell the whole story of charisma? We believe that true charisma is made up of a wider and deeper range of physcological attributes than can be captured simply through voice mechanics. Voice tone is part of the story  — yet very far from all of it.

Communicate Charisma’s 2D projection map is based on a series of personality types that form the basis of ‘avatars’ that show different charisma types in action. Fig 9 shows how four quadrants of the 2D grid translate into core personality types commonly seen in political figures. 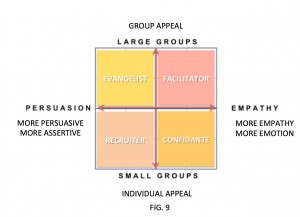 In the case of Bossi’s own transformation through the AVC and resulting voice change, the results were irreversible. But truly charismatic leaders have the capability to match persona and to the needs of their audiences by changing vocal tone. A case in point is the former British Prime Minister Margaret Thatcher. I never interviewed her, but journalist colleagues who did told me of the husky, sexy tone of voice she adopted during individual encounters that was totally different from her usual strident voice on the conference platform of in the House of Commons. 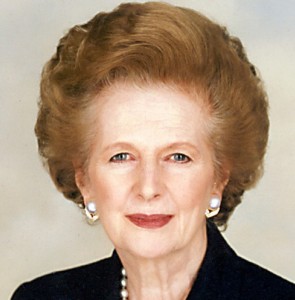 Plotting human influence around four personality types would also be an over-simplification. So Communicate Charisma’s methodology uses a more nuanced spread of “avatars” across the 2D grid (without mentioning the total of 144 variants our method produces when the 7D map is included). Fig 10 shows the arrangement of personality types upon which self-assessment results are overlaid. 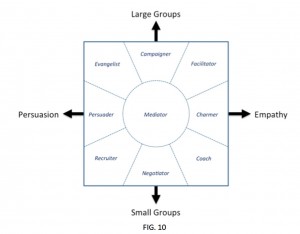 In the case of Bossi before and after his AVC (or Margaret Thatcher when giving a media interview), the transformation in perception is shown in Fig 11 and Fig 12 by the migration of the blue ellipse. 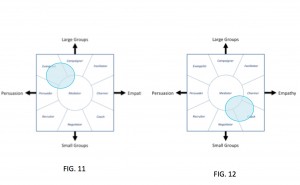 All those who complete an online self-assessment are first invited to give their opinion of a famous communicator. The resulting data supports Communicate Charisma’s project to map and measure the charisma assets of public figures as a means of helping ordinary individuals to unlock their own power of responsible influence.

Figure 13 shows the composite picture of how three great public figures are seen by visitors to our website www.communicatecharisma.com. 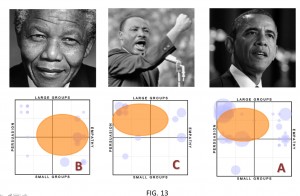 As you’ll see, there is substantial variation in the way Nelson Mandela, Martin Luther King and Barack Obama are perceived.

It would be a fascinating experiment to see if UCLA’s group could conduct another test using tape recordings of these three English language speakers, to see if these findings are confirmed!

In case you’re curious, did a minor regional politician like Umberto Bossi ever really have charisma, and if so where did it get him? Not far:  After helping prop up Silvio Berlusconi’s scandal-plagued administration in Rome, he was finally disgraced in a 2012 corruption scandal.

For this column, the votes are in: charisma may be projected in part using vocal tone or body language, but its true essence is greater than the sum of these elements. For that we must unlock authentic personality.