Keeping a car in your living room might sound like a weird aesthetic judgement — even if  the vehicle is worth US$1.3 million and judged by many to be a work of art and the most desirable of all super-cars for the super-rich.

But if you lived in Brazil, a country with one of the world’s highest rates of car theft, where  a car is stolen every three minutes, you’d  be justified in thinking  it might be a safer place for your Mercedes McLaren SLR than out on the mean streets. A little nouveau riche for some tastes  – and you might have to  deal with oil drips on the  priceless carpets —  but the silver paintwork does set off the soft furnishings and those Impressionist paintings nicely.

Posing for society photographers with a $1.3 million car-as-artwork in your living  room sends the unambiguous message: “suckers, I have arrived at the big-time.” And that, in Shakespearean language, means hubris. And hubris brings trouble. Read on if you want to see just how fast trouble came calling on one family with a penchant for automotive home furnishings. 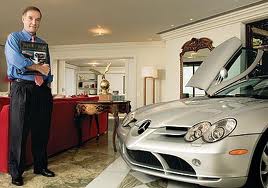 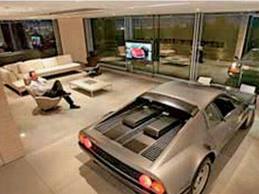 Even though he lives in a palatial mansion in Rio de Janeiro’s swish Jardim Botanico, you’d think  that getting a car inside the house must have been a struggle for the owner Eike Batista, the world’s seventh richest man whose fortune recently topped US$30 billion. No actually, he has a Ferrari in there too. Even before he made a spectacular leap up the Forbes rich list in early 2012, Batista had been splashing it about a bit. When Madonna  came for dinner in 2009, he wrote her Malawi  charity a cheque for a cool US$ seven million.

Once the SLR was indoors, you’d think Eike (as he’s universally known in  the hyper-personalised culture of Brazil) wouldn’t ever want to take it out again, and would concentrate on toppling fellow Latino Carlos Slim from the Forbes top slot. 55 year-old Batista, seen here alongside Brazilian president Dilma Rousseff, was the nation’s premier rockstar capitalist,  a widely-admired prophet of  national self-esteem and can-do entrepreneurism who built a titanic empire of oil and mining assets from scratch. Had he wished for it, Eike’s path to the presidency would have been a hop and a skip. 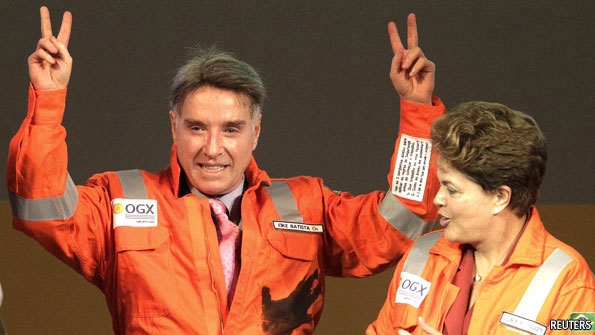 Lionised by the media, Batista was a huge hit on US TV chat shows and made the covers of all the Brazilian magazines. One even  compared him favourably to China’s Deng (“It is glorious to get rich”) Xiaoping: 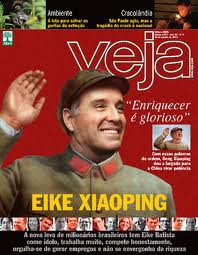 Eike, it seemed, had  Charisma by the bucketload.  But did he … and was his style and swagger more  chutzpah than true Charisma?

And today, Batista must be wishing he’d  kept that accursed SLR in the front room, because ever since it came out, his fortunes have taken a most horrendous dive. Since March, it has all gone horribly, horribly wrong for Eike. Now he has to deploy all his considerable skill in crisis communications.

First came the money.  Recent reports suggest  Batista has taken a pasting on the Brazilian stock market and is no longer even Brazil’s richest man, let alone the world’s seventh wealthiest. Forbes, which first trumpeted his wealth, has Batista’s  net worth down by a stonking  US$15.5 billion. By June — just four months after it published its 2012 listing,  another  hostile article underlined the fact that  Batista had been airbrushed from the Forbes “realtime” version of  the 2012 rich  list.

Local media reports have  Batista as selling stakes in all his key businesses to meet margin calls. Batista’s oil company OGX — once billed as a serious competitor to the state behemoth Petrobras,  is down 40% and looking to  its  main stakeholder for a big cash injection.

And it’s not just about  the money. There’s death and personal tragedy too.  Batista could be forgiven for thinking there’s a curse on that Mercedes SLR, which has also been the cause of fatalities  in Germany. The trouble started when  Eike handed the keys to his 20 year-old son Thor (offspring of his partnership with supermodel Luma de Oliveira) for an evening spin to the Rio suburbs.

Was it a sound judgement to  pass the keys  to the fastest automatic saloon car in the world, with its 207 mph top speed and 625 brake horsepower engine, to a brash young playboy? Jeremy Clarkson, BBC Top Gear  presenter,  may describe  this car  as a “prawn and avocado sandwich,” and  rave about its ceramic brakes and parachute-like air brakes that can stop on a dime. But it turned out to be a lethal weapon,  for  young Thor who couldn’t stop this monster motor when he needed to. And now father and son are in deep, deep trouble. Beside his glamorous father, Thor himself has a more modest  media profile, though Brazilian magazines have puffed him up mightily.

The plain facts are that  on March 17th, Thor hit a man on a bicycle  while driving the Mercedes, and killed him instantly. The accident happened in Xerem, about 50 Kms from Rio. Cyclist Wanderson Pereira dos Santos, 30, was out buying flour so his wife could bake a birthday cake. Traffic investigators found that Thor hadn’t been speeding and he passed the breathalyzer test. So they  let him go. The event was kept fairly quiet inside Brazil – until it made the New York Times.

The SLR was damaged — but not as much as Eike’s reputation, because of what came  later. 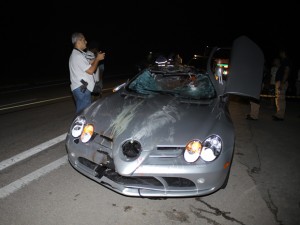 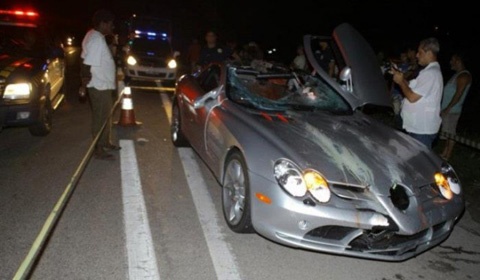 The episide couldn’t be  hushed up — even in Brazil. And it unleashed a torrent of salacious reporting from Forbes, the publication that had initially set up Eike’s own reputation. Wealth reporter Clare O’Connor got stuck in  with sensationalist articles on the carcrash like she was working for the New York Post. Bizarrely, even the specialist automotive press got involved.

The drum-roll of salacious  international interest from tabloids as far away as the UK got too much even for Brazil’s judiciary (ever discreet when handling the privileged classes)  and in May Thor was indicted to stand trial on manslaughter charges. Forbes went wild. Of course it was a “rich meets poor” story  with some  easy conclusions for reporters to draw, noting Brazil’s yawning social divide, its Gini coefficients etc. The clash of contrasts between Mercedes driving playboy and poor cyclist was the stuff of Brazil’s racy TV soap operas or novels, in which TV Globo leads the world.

What is whispered on the Brazilian caipirinha party circuit  – but not much written about, is that Thor has “previous.”  The Rio police recently removed a Ferrari belonging to him. 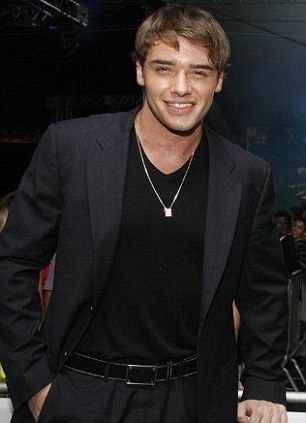 About the March incident, what none detected at the time was a bizarre “life imitates art” plotline in which the Batista accident — and especially the involvement of a Mercedes, almost exactly duplicates the substance of  Brazilian writer Clarice Lispector’s  1977  novel “Hora da Estrela”  (the Hour of the Star). Lispector’s story revolves around the inner monologue of Macabéa, a dirt poor immigrant from the northeast of Brazil who wanders the streets of Rio de Janeiro fantasising about  an encounter with a rich man whose presence is symbolised by a star. The contact eventually comes — when Macabéa is hit  by a man driving a Mercedes. In the 1986  film version the camera focuses steadily on the  Daimler-Benz three pointed star as Macabéa’s body crumples and the man drives away without a care. 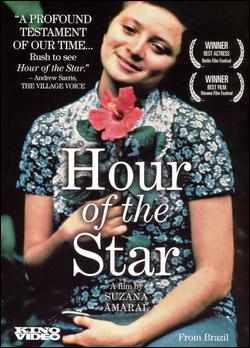 For those not familiar with Brazilian literature, the other great rendering of this same story is Tom Wolfe’s comic American novel  Bonfire of the Vanities, which profiles the agonies of the rich investment banker set in 1980s New York. The  plot engine is exactly the same — the hero Sherman McCoy’s  sportscar strikes a poor black student in an outlying  borough. And even though the hero is not driving the car, Sherman takes the rap, starting his dizzying fall from fortune and fame as he is hounded by the media and by opportunist politicians. It’s a tribute to Rio de Janeiro’s new status as a global city and Brazil’s rise to riches, that today it can host a plot structure more commonly associated with New York’s wealthy set. 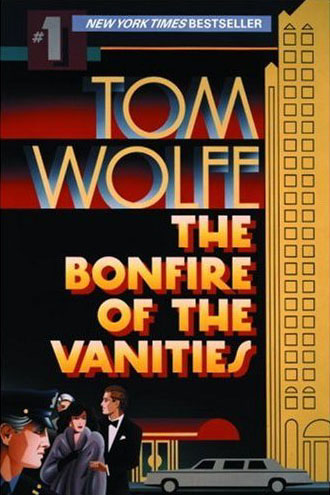 The ongoing problem for the Batistas is that both appear to have ignored legal advice and are  talking – or tweeting — about the accident before the trial begins. Thor’s status page on Twitter claims “I drive automatic cars  and keep one foot on the accelerator and one on the brake, which makes my reactions much faster.” Thor has been making repeated statements about  his innocence on Twitter, and the local media  is lapping up every word. I’ve driven  enough on Brazilian roads to know that cyclists, especially at night, are a major menace  and young Thor may well have been driving  his father’s mobile work of art quite carefully.

Eike Batista’s own Twitter feed mixes  braggadocio with  self-justification. Some examples: “On days when I feel I’m at the bottom of  a well, I dig deeper and I strike oil.” Or “My tip on how to look great: buy a Ferrari.”  Or, poignantly perhaps: “Who are  you on the Forbes list?” But Batista also used to Twitter  to start the defence of Thor, and claim that it was “not Thor’s imprudence that caused the accident.” Both Thor and father are claiming the dead man was crossing the road, not riding along it, when the car struck.

No one is yet clear on just how these “pre-trail submissions”  via Twitter will affect the integrity of the upcoming manslaughter trial. On-the-hoof  reputation management  of this type isn’t usually recommended. But one thing is certain. The  Brazilian Justice Minister has a tough job on his hands. If he  chooses to make an example of Thor to consolidate Brazil’s credentials as a fair, just and equal society, he’ll face the wrath of Brazil’s privileged classes. If he tries to sweep the affair under the carpet, that sends a message that — despite the arrival of billionaires with million dollar super cars,  Brazil is still a postcolonial society where wealth and  privilege is above the law.

What all this adds up to is that Brazil’s richest man is  having to communicate his way through a crisis of major proportions, and is fighting to save his reputation, his fortune, and his son. I haven’t met Eike personally, but I’ve seen that he is a formidable communicator, a man of hypnotic charm, and a hugely able businessman. If anyone can spin a story to get himself and his son off the hook, it will be Eike. Let’s wish him luck, because Brazil deserves to have its first home-grown business superhero  to look up to, even in somewhat tarnished form and positioned way, way  further down the 2013 Forbes list.