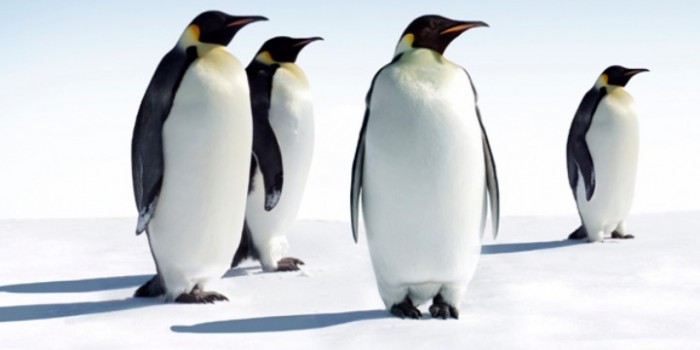 Transformational Leadership has been widely studied by executives in large organizations for decades. And today it’s relevant to those with responsibility for enterprises of every size and shape – and indeed to every individual.

Because we believe leadership is primarily exercised using communication, we explore how charisma can empower transformations great or small. And how those with charisma can actually set popular expectations – rather than just meeting and exceeding the expectations others have of them. 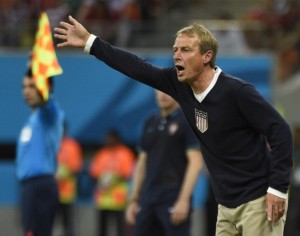 Strip away the management jargon and transformational leadership is really just what your grandmother was practicing, if she ever she taught you how to bake better cakes, or to sew a neater patchwork quilt. Likewise, the coach of every national soccer team that made it past the group stage at the 2014 Brazil World Cup, proved himself a devotee of the three-step skills rule:

First: Standardize and build absolute consistency in your chosen field. (Cakes that are never burned, never undercooked; passes that connect to players every single time.)

Second: Get better and better at what you do, till continuous improvement has delivered every last watt/gram/centimetre of efficiency. (Quilts that take less time, use less material; a shot on goal from every set piece).

Finally: Deliver breakthrough improvements through real innovation and disruptive change. (End-to-end creative play that wrong-foots the goalie and leaves the opposition standing. After perfecting cakes, why not try croissants?)

At each step, the leader will need to recruit followers by lowering their barriers of mistrust or disbelief. That’s where charismatic communication comes in.

In the business world, there’s no better example of this than the astonishing growth of online retailer Amazon. Back in 1995, founder Jeff Bezos built an online bookstore that delivered books cheaply and reliably, without his customers having their credit card details stolen.

By 1998 Amazon was piling on incremental improvements with advanced delivery options plus ever lower prices and interactive customer reviews; sites that spanned the globe, and by widening its range through Marketplace to today’s astonishing 230 million product lines.

By 2006, Amazon was in full innovation phase, launching cloud computing services, set-top boxes, the Kindle eBook, and ideas like the PrimeAir package delivery drone. Advanced CRM means customers just don’t pick and choose products –their preferences are picked and chosen by Amazon. Now comes the game-changing Fire Phone that, says the Economist, “will turn the whole world into a shop window” – only delivered through Amazon. 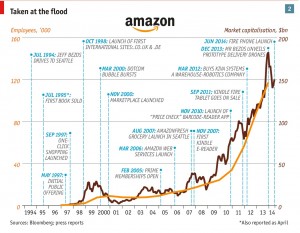 At every stage, founder Jeff Bezos (now wealthy enough to be a space entrepreneur of the side) creating followers by setting expectations. Look back over the old business news TV clips of 15 years ago and you’ll find Jeff Bezos repeating over and over: “Don’t buy Amazon stock if you want dividends or a safe ride. We’re building a valuable company – but it will take time.”

No wonder then, that The Economist’s cover article on Amazon shows – perhaps only half jokingly – an astronaut delivering a parcel on the moon. 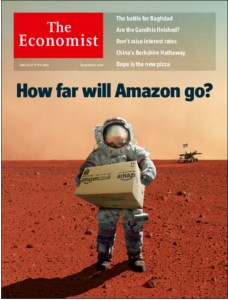 “To Infinity and Beyond” with Amazon

These three leadership models were first defined by the German sociologist Max Weber in 1947. Crucially, Weber identified the transformational leader as using communication skills to set expectations and bring about change by articulating creative and visionary expectations.

Weber didn’t just emphasize that transformational leadership was a communication function. He specifically identified the ‘charismatic leadership’ qualities that set aside exceptional leaders as having to do with  the power to motivate or engage  followers through their  vision.

James MacGregor Burns, a Pulitzer prize-winning biographer of President Roosevelt and management guru, took the Weber concept further by showing how transformational leaders build influence that in turn generates respect, admiration and trust among their followers, sometimes causing them to emulate the leaders’ behaviors. These attributes of charisma were explored by sociologists such as the Wharton School’s Robert J. House (no relation).

In his 1978 book Leadership, Burns explored how transformational leaders used their relationship skills to accomplish common goals through motivation. This type of skill involves mobilizing, inspiring, exalting, and uplifting, rather than using power for its own sake. While transactional leadership depends on give and take, Burns described transformational leadership as a process where “leaders and followers help each other to advance to a higher level of morale and motivation.” 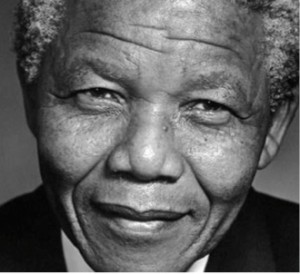 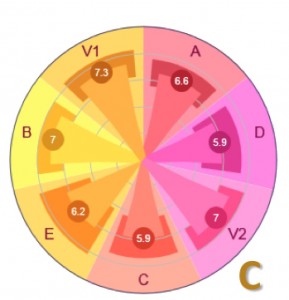 In his 2004 Book Transformational Leadership Stephen Hacker probes a little deeper into what actually makes such a manager and what attributes accompany each character facet.

First comes enterprise mastery – or being “good at what we do.” This calls for analytical skills and drive or energy. Here the focus is inward and will likely focus on standardization (the first of the three steps).

Next comes interpersonal mastery – or being “good together and in the world.” Here the focus is outward and involves community and meaningful interactions. Often this involves the process of continuous improvement of process or actions (the second of the three steps).

Finally, comes self-mastery – or being “good at changing ourselves and the world.” Here the focus is on transformation itself –bringing ideas and change into the world. The crucial attributes for bringing such change into being both focus on communication. These are to be both creative and visionary. This, of course, is the third step.

As you can see, these thinkers established much of the groundwork upon which today’s discipline of Emotional Intelligence, created by Daniel Goleman, is based. Goleman’s recent emphasis on empathy as a leadership attribute goes straight back to Weber’s pioneering thought. Writing in the Harvard Business Review, Goleman said that empathy and the ability to understand the emotional make-up of other people was a sine qua non of great leadership.

Crucially, Weber identified the transformational leader as using communication skills to set expectations and bring about change by articulating creative and visionary potential. He identified these as ‘charismatic leadership’ qualities.

It’s no coincidence that, just like Max Weber, Communicate Charisma works to visualize, map and measure this key leadership attribute. The charts you see accompanying the portraits of Nelson Mandela (above) and Martin Luther King (below)  depict the ‘wisdom of the crowds’ charisma portraits created by you online using our own system.

Think about any really effective leader you care to name, and you’ll see that his or her power to make a difference didn’t come from the ability to make the trains run on time, or to build a consistently better mousetrap. It comes from having the power to communicate potential for deep change of the kind that Jeff Bezos delivered through Kindle, or a dozen other innovations that have left both Apple and Google (no slouches themselves) gasping. 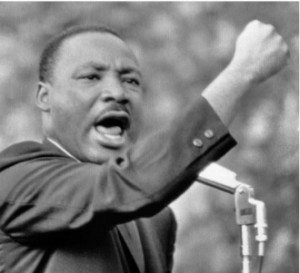 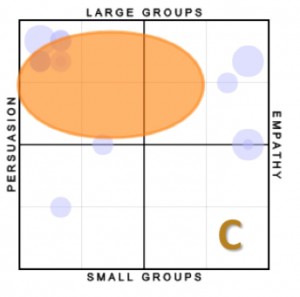 Transformational leaders don’t deliver change by meeting or exceeding expectations – they do it be setting expectations. And every time, that’s done through effective communication. Not simply knowing “what to say” (the message), or even “how to say it” (the narrative), but knowing “who to be” (persona).

In coming weeks we’ll look further into the attributes of Transformational Leadership. And we’ll explore a piece of good news: Everyone has some charismatic power of influence. Perhaps your persona manifests itself best through empathy; perhaps it’s through collaboration – or any one of the Seven Dimensions of Charisma we have identified and built into our methodology.

It’s just a matter of uncovering and then getting to know your forte as a communicator and influencer. And Communicate Charisma may be able to help with that.