From the mighty pyramid of words that constitutes a swelling testimonial to the life of Nelson Mandela, one thing shines through.

He was a man who changed things around him, without changing so much himself. Following his Long Walk to Freedom in 1990 he went onto become the most venerated global leader of the electronic age, and a living portrait of charisma. 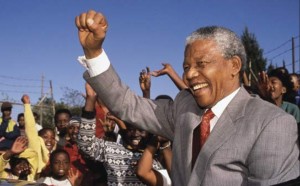 Distil down that vast pyramid of praise from all the life appreciations, obits and assessments published by the world’s media following his death 5th December 2013, and you get a sprawling catalogue of definitions we can summarise in a single word: charisma. Some people have tried to make Mandela a man of destiny, or to describe a sanctity that clung to him, but more reliable witnesses show it wasn’t that at all.

The late Anthony Sampson, Mandela’s authorised biographer and close friend who first knew him as a Marxist firebrand in the 1950s, identified the source of Madiba’s charisma: “He knew how to get people to come along with him.” 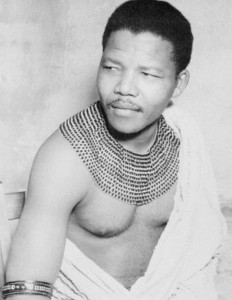 In fact, Mandela was able to bring about change by lowering collective disbelief in seemingly-impossible ideas, and awakening the need of others to see him as their leader. That’s a textbook description of charisma.

We can say the life of Nelson Mandela is as notable a charisma portrait as we shall ever see: Google ‘Mandela + charisma” and you’ll generate 645,000 headlines in 0.25 seconds.

Of course, using Google just gives a very basic measure of how many thousand obituary writers think Nelson Mandela had charisma, but doesn’t tell us how these writers define it. Nor does it tell us what characteristics or attributes went to make up that charisma. And of course, it simply aggregates what writers or bloggers say. We want to know what ordinary people everywhere think.

Readers of this column know we’ve are running a “wisdom of the crowds” project using our online assessment tools, to harvest your vision of the charisma attributes of Great Communicators.

We think this provides a useful contribution to the study of leadership. And as the numbers of people makigng the assessment grows, so will the reliability of the portrait.

Recently we looked at Martin Luther King’s charisma, and asked you to assess by using our online survey tool.

Now, sadly but inevitably, comes Mandela’s turn. In recent months Communicate Charisma has been collecting assessments to find out what you believe constitutes the special magic of Nelson Mandela. You can see the evolving assessment by clicking here.

If you want to add your own voice, you can do this  by selecting Mandela as your chosen “Great Communicator” before you go on to complete the survey for yourself. The whole exercise will take less than 10 minutes. You can start  by clicking here and selecting the “self-assessment” button to go through the process

In a nutshell, here’s how “the crowd” defined Mandela’s charisma. The words most chosen were “Thoughtful,” “Authentic,” and “Ethical,” followed by “Unifying,” Trustworthy” and “Empowering.” 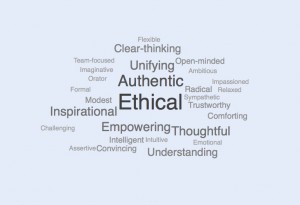 Communicate Charisma’s methodology is built around two different maps or projections. The 2D projection profile shows how individuals present their “charisma assets” to the world as they go about influencing people. 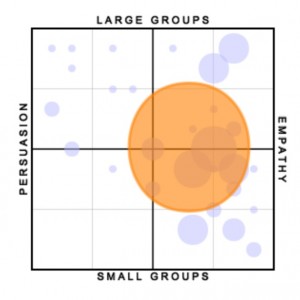 The Two Dimension (2D) Projection profile positions individuals on an axis between persuasion and empathy (horizontal) and a propensity to influence  larger or smaller groups (vertical). From this profile we identify Nelson Mandela as having the “Facilitator” projection style, being someone who brings comfort and sense of shared ownership by emphasising affinities or unifying characteristics even in diverse groups.

From the placement on the Persuasion-Empathy axis, we see a “Comfort-giver”, who exhibited a heightened awareness of others’ needs and openness to feedback that nurtures productive dialogue and mutually satisfying outcomes. The Large-Small Groups type here is “Pragmatist”, suggesting that Nelson Mandela had a good balance between communication aptitudes for different audiences or interlocutors.

The second map is the Seven Dimension  (7D) Essence profile, which shows the energies and attributes used by individuals as they communicate.

In Mandela’s case, he has a higher energy level (L4) in  five of the seven  attributes. This includes particularly  strong energy in the  areas of Beliefs, (B) Values (V1) and Vision (V2). The chart below shows how the Communicate Charisma tool translates these values into verbal descriptions, showing the collective assessment is that he had  a commanding (V2), inspiring  (V1) and affirming (B) presence.

The pizza-style wheel shows two types of metric for each of the seven zones. The wedges emanating from the  centre and the numerical value show the energy level (the further from the centre, the higher the energy).

Behind each of these wedges lies a broader  fan indicating the range  across which an individual can apply charisma in each given  zone. In each zone Mandela scores  an “average” range suggesting he  was able  to apply  his charm across a reasonable spectrum or communication opportunities. In short, a “full-spectrum” communicator! 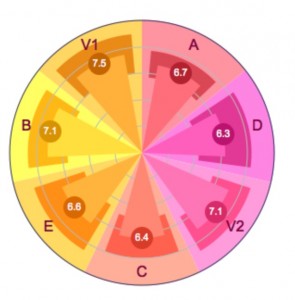 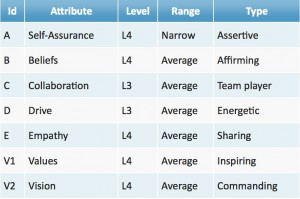 Does this portrait of Mandela (constructed overthe last  3-4 months) fit what we know about him — and fit the comments we’re reading today?

Above all, does it fit the image of a man whose charisma empowered him to bring about change on a massive scale? Finally, does it help us to glimpse where Mandela’s greatness resided?

Does it help us learn  how did he get other people to change their views? 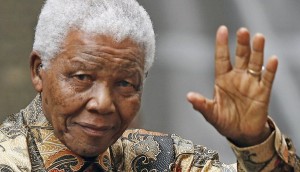 Mandela was certainly a great statesman. But he was not a great general. Some assessments suggest a quarter century in jail rendered him naïve and cut off  from political savvy or administrative skill. Nor was he a great orator (setting aside his remarkable statement at the Rivonia trial). Some of his later fund-raising and glitzy philanthropic activities were questionable or at best naive.

Mandela took up arms and then laid them aside; he pronounced himself ready to give up his life to guarantee inalienable rights for his countrymen; he spent 27 years in jail. He emerged to become South Africa’s first democratically elected president in 1994 and to lead his country though healing and reconciliation. He relinquished power in 1999, and became an Elder of humanity.

In this narrative, individuals, communities, nations and arguably the whole of humanity changed – all because of one man. It’s an achievement comparable to that of Galileo, who challenged the Pope and revised our whole view of the cosmos. Nor is it coincidence that the only other truly global change agent of the 20th century, Mahatma Gandhi, also began his career in the crucible of South Africa’s racially-dominate politics. Both led peaceful revolutions.

The outpouring of tributes, memories and assessments of Mandela’s life achievements makes very clear the magic that he applied and scale of the change he brought about, whatever his flaws. 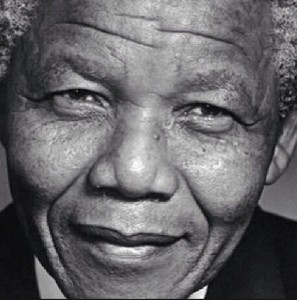 Apartheid degenerated from a plausible (to some) lie into its rightful status as a universal abomination.  The ANC renounced violence, in time. Mandela’s jailers – from PW Botha to FW de Klerk to the warders of Robben Island – changed their view of the man (the warder got a VIP ticket to Mandela’s presidential inauguration). A whole country put aside strife to live up to his unifying dream of a “rainbow nation.” Britain’s Margaret Thatcher first described him and the ANC as a “typical terrorism organisation,” then learned to respect him. American Republicans at first hated his communist-sounding manifesto – yet in 1986 they overturned Ronald Reagan’s apartheid-friendly veto of a US sanctions law. The Afrikaner community who swung behind him in 1995 when he championed South Africa’s Rugby team, as portrayed in the film Invictus. 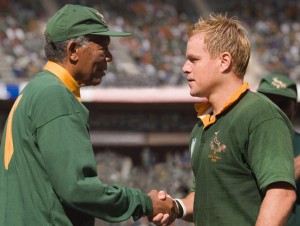 In his eulogy delivered in South Africa, US president  Barack Obama quoted the closing lines of  Invictus by the Victorian poet William Ernest Henley, which had been much admired by Mandela. Curiously, this little known poem by a little known poet was also greatly admired by FD Roosevelt, and by  Burma’s Nobel laureate Aung San Suu Kyi. And it’s also quoted by Humphrey Bogart’s character in the film Casablanca.

Perhaps it encapsulates a definition of a truly charismatic character

I am the master of my fate:
I am the captain of my soul.

Mandela had already been in Robben Island for a decade when I first went to Bristol university in 1973. But we certainly knew who he was: at the student union our cut-price beer was served in the Mandela Bar, where activists warned us against sanctions-dodging businesses like Barclays Bank. Even in jail he changed the views of one British student who followed his career  from afar for the next 40 years. Reading the obits, I was astonished to discover that it was not until 1983 – a full ten years after we were inducted into the Mandela myth at Bristol university – that his name was first mentioned in the UK  parliament by an opposition MP, and it was only in 1984 that the first “Free Mandela”  rock music song came out.

Let us pay tribute to a man who fought against domination in all its forms and righted the most entrenched of all wrongs to assail humanity during my lifetime. And if some of the magic he used to do this  (and some of the charisma too) can be understood and passed on, then perhaps this will help other leaders  engaged in righting other wrongs.