If your CEO bungled an all-important product launch due to a combination of over-confident assumptions, poor market research and wooden communications skills, he (or she) would be out within hours, right?

If, however, this same lame-duck CEO clung on against attacks from a newly-invigorated rival in the face of a plunging share price, getting support from an aggressive value investor, wouldn’t your resumé already be at the head-hunters?

Yet business and politics are governed by quite different rules.

Consider the consequences of Britain’s traumatic June 8th general election, called by prime minister Theresa May to validate a poorly-defined and wholly untested product named “Hard Brexit” – all in hopes of increasing her parliamentary majority. With her “strong and stable” mantra, May seemed a shoo-in.

Yet less than a year after a huge focus group (Britain’s shock June 2016 referendum on EU membership) indicated willingness to buy the “Life outside Europe” product so tantalisingly evoked by pro-Brexit campaigners, a volatile British public went dramatically cold on the sharper-edged model talked up by May’s Conservatives.

The promise of a “strong and stable” government was muddied by policy flip-flops, campaign evasion, but above all the absence of an authentic vision in the wake of the seismic 2016 referendum vote.

So the election result deprived May and her Conservatives of 13 parliamentary seats. Instead, voters handed 41% of votes to Labour party leader Jeremy Corbyn, placing him almost within reach of government.

Having lost her majority (akin to a run on Tory shares), May’s administration has since fallen into the arms of the DUP (a fringe party seeking UK£1 billion in aid for Northern Ireland as the price its 10 votes). With the DUP’s aid May will cling to power, despite being lambasted both for her lack of empathy, for her hyper-pragmatical readiness to change track, and her compulsion to centralise key decision-making.

The important learning from Britain’s destabilising lurch into weak political governance on the very eve of Brexit negotiations (facing increasingly implacable EU counterparts), is that when it comes to public office, character is competence.

May broke with standard UK practice to campaign not on her party’s deep traditions, but on the merits of “Team Theresa,” plus a political manifesto complied in secret by her two closest aides.

More than the “what to say” or “how to say it” attributes of message presentation or spin, it’s the way character — “who to be”– is manifested by politicians that determines their destiny.

Perhaps one of the reasons why pundits and pollsters regularly call elections wrong, is their focus on supposedly ‘empirical’ aspects: campaign promises, demographics and respondees’ responses to obvious-yet-dull poll questions.

To understand how we vote according to character – rather than promises – we need a different yardstick. So, let’s see if the Conservative May’s unhappy electoral outcome could have been more accurately forecast, using an accurate psychological plot of her character attributes.

When Charisma Came up Short.

The conceptual model we’ll use to analyse Theresa May’s communicative persona has seven attributes or dimensions. We call this  pizza-like image a Charisma Essence Profile. We’ll also use a simpler, two-dimensional  plot Charisma Projection Profile to show how a person like her communicates.

To represent these character attributes visually, we’ll show plots from our proprietary Communicate Charisma psychometric testing tool showing the ‘map’ of a person of similar outlook. It generates a detailed and personalised 20 page Report.

Theresa May herself has not – as yet – joined the many hundreds of people who have completed an online Communicate Charisma self-assessment test. So this is a simulation of what her profile might look like. It is not the real thing.

Nevertheless, this is a real report of exactly the kind available to you today. We’ll include verbatim quotations from this imaginary person’s seven dimension Charisma Essence Profile: 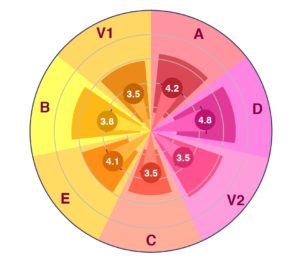 What the Charisma Essence Profile of somebody with similar attributes to Britain’s Prime Minister looks like.

Empathy. Populist media dubbed her “Maybot,” cold and unable to interact with ordinary voters. In the Profile of this person we see that “Unconcerned with Average Range” places this person at Level Two in the five possible grades. This emphasizes ability to “cut through emotional clutter and focus impassively on the goal in hand.” But the report warns “you might not be ready to put yourself fully in another’s shoes.” 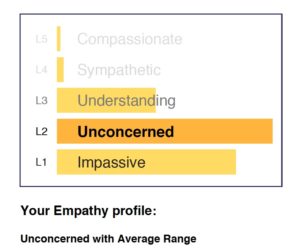 Beliefs. May’s own hyper-pragmatic switch from a Remain supporter to Leave after the 2016 referendum propelled her to power. Likewise when her “dementia tax” idea became unpopular she quickly ditched this core manifesto commitment manifesto to address intergenerational equity issues by forcing older voters to surrender assets in exchange for treatment. In the Profile we see “Agnostic with Broad Range” places this person at Level One. “People expect that you’ll be cautious about showing your core beliefs.” The report describes the “protective façade of doubt” thrown up by people who adopt this “aloof stance.”

Collaboration. May’s preference for the private counsels of her two (now-departed) chiefs of staff, Nick Timothy and Fiona Hill – in preference to her Cabinet or her wider party – earned her the reputation of a controlling figure keeping her cards close. The Profile describes “Independent with Average Range,” a Level One person who is “not malleable or easily influenced by others.” Such an approach characterizes “those determined to achieve their goals alone.” 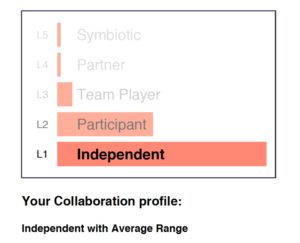 Values. May’s opportunist attempts to shift her right-of-centre party’s appeal toward blue-collar voters in the “Just About Managing” category seemed at odds with its historic low tax, pro-business, pro-wealth ethos. The result was confusion about what her policies stood for and who they were designed to benefit. In the Profile we see that “Neutral with Broad Range” is cautioned for appearing “evasive or irresolute” while acknowledging “some situations can require players to keep their cards well hidden.”

Drive and Self-Assurance. Unsurprisingly for a career politician who’s made it to the very top of the heap, no one doubts May’s ferocious appetite for work or her rock-solid self-esteem. Her long tenure as Home Secretary (equivalent to minister of the interior), marked her out as both survivor and seasoned political operator. In the Profile we see Drive earning highest scores (Level Three), backed by praise for a “dynamic and assertive way of communicating ideas,” plus an “outpouring of your abundant energy.” Likewise, Self-Assurance is characterized by “tact and diplomacy.”

Vision. May came to prominence over a decade ago by naming her own Conservative Party as “nasty” and seeking to reboot it as a more compassionate and inclusive grouping. Likewise her attempt to triangulate Tory appeal into the ranks of disillusioned Labour voters, at first seemed to betoken a clear vision. Yet the Profile describes a person with low energy in the Vision field: “Empirical with Broad Range.” For such a person, “facts won’t let you down and will keep you safe from fantasies or illusions.” Nevertheless such a person knows that “all good communicators tell an effective story by sharing aspirations, not just offering hard data.”

Now comes the two-dimension Charisma Projection Profile. Few would dispute that – casting aside her ill-advised decision to dodge a pre-election TV debate – Theresa May is a dogged, and incisive communicator who uses energy and her “let’s be clear” mantra to make up for her lack of charm. May is formidable in argument. 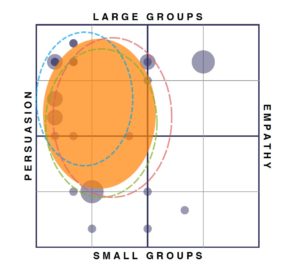 What the Charisma Projection Profile of somebody with similar communication style to Theresa May would look like.

In the 20-page simulation Report showing what the profile of someone like May might look like, the Projection Profile strongly favours Persuasion over Empathy. Indeed, the overall profile is of a “Persuader.” This defines the person as a “Convincer with Average Range.”

In terms of preference for large-scale audiences, or the more intimate sensation we get from those able to use the TV camera as a tool for talking to us personally, this person ranges as a “Performer” who will “thrive under the spotlight and relish the opportunity to engage large audiences with acts of showmanship.”

What you’ve just read could indeed be classified as political analysis exercise that benefits from 20:20 hindsight.

But the very same Communicate Charisma tool can be used by anyone to empower foresight, revealing the way each individual’s unique mix of character assets combine to define the influence her or she has over the choices people make.

Whether it’s a new product, a new government, or a new job, it’s simply too risky to press forward without having any clear idea of  how other people are likely to be influenced by what you say.