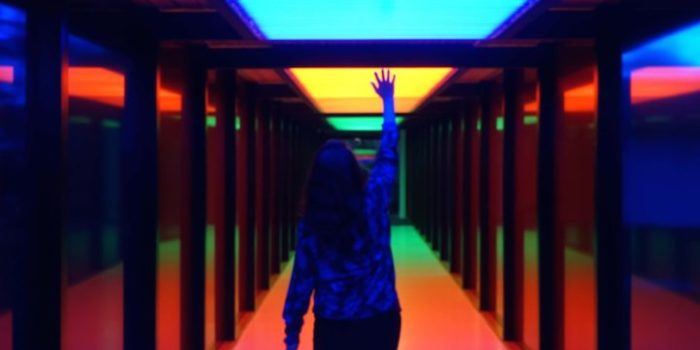 Just as every hue in the rainbow can be traced back to a mix of primary colours, can human behaviours and the ways we communicate them, be boiled down to a recognisable pattern? Alas, humans don’t conform to colour theory.

In fact, if there’s one truly consistent thing about human behaviour, it’s that people behave and communicate inconsistently. So any truly reliable template for psychological typing would have to use this inconvenient truth as a starting-point.

The blog below is the third part of our explanation of how we went about designing a workable,  pragmatic and market-friendly methodology to map and measure the forces at work every time we communicate.

Breaking the Boundaries of Expected Behaviour. 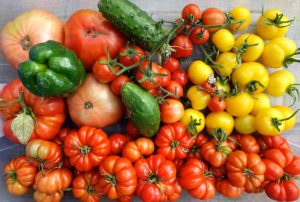 We can all think of cases where – just like the Ugly Duckling – supposed introverts have transformed into glittering swan performers. It’s easy to think of examples where parenthood has turned domineering, even bullying fathers into much softer and more receptive individuals.

People constantly break the artificial bounds set upon their expected behaviour. This inconvenient truth has upset many a prestigious social science or post-doctoral psychology experiment, and fostered scepticism that it will ever be possible to find an accurate set of rules predicting the way people behave. And if such rules really exist, they would have been discovered long ago.

There’s an extensive body of critical academic work examining psychometric testing methodologies based upon the psychologist CG Jung’s Psychological Theory of Types, that we’ve been exploring in earlier blogs, using everyday terminology. You can find these articles here (Jumping the Stream with CG Jung) and here (So how does Communicate Charisma work?)

These two earlier blogs analyse the famous example cited by Jung, of a group of five men confronted by a brook or stream they must jump. Their differing reactions to the challenge are cited by Jung as his starting-point for the development of psychological type theory.

The general consensus is that while the theory’s original basis may not be proven as fully scientific, it provides a solution for mapping the psyche that in practice works more often than not. And because methodologies such as MBTI based on these Jungian insights focus on personal strengths, their use raises awareness. This all tends to be self-fulfilling in terms of boosting personal effectiveness.

But there’s one important drawback to Jung’s case study, and – by extension – to any theory built around fixed behavioural dichotomies. If he’d watched those five men one day, or even an hour later, Jung might have seen the same people behave quite differently. 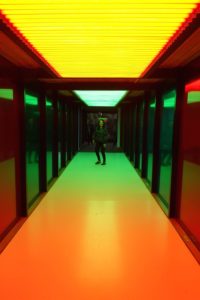 People don’t always act in conformity with a supposed character type, but operate within a range of behaviours. This is instantly visible if you ask a group of children to draw an animal or bird: there will be dramatic  variations is the way they undertake the task at different times or in different environments. 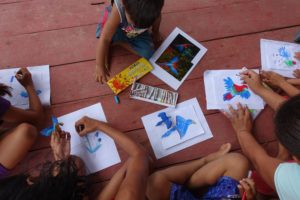 Children have widely differing visions of the same blue macaw.

Certainly, our understanding has advanced in the almost 100 years since Jung first postulated mapping of the human psyche to demonstrate how humans process their experiences. What have we learned to help us address the central flaw of psychometric tools – that people neither behave the same way all the time, nor do they fit neatly into 16 categories?

A whole industry of post-Jungian thought has developed – in part dedicated to healing the ‘mind-body’ split visible in the work of early practitioners. Jung’s own observation that “we can draw far-reaching inferences as to the constitution of the psyche from the constitution of the body,” led to observation by his followers of the ways in which the body manifests psychic discomfort.

Psychology’s ‘rebel angel’ Wilhelm Reich in the 1930s postulated ideas that led to the development in the 1970s of bioenergetics by his followers Alexander Lowen and John Pierrakos. They in turn influenced Stanley Keleman, who in the 1980s brought important ideas from the world of anatomy into the discussion of how the body’s somatic or involuntary activity mirrors mental processes driving our behaviour.

Particularly, Keleman’s formative psychology focused on the pulsation or cycles of activity in the heart, involuntary nervous system and musculature, and the ways these are reflected in emotional cycles of anger, pride, fear, rage or grief. The mind-body continuum and its pulsation between tension and relaxation, helped Keleman to define what he dubbed our “emotional anatomy.” 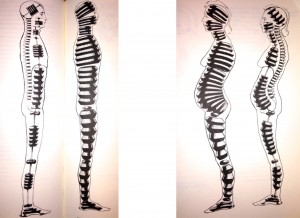 The key innovation here is that – just as the heart continuously cycles between systole and diastole, and the spinal structure varies between overly rigid or collapsed – so our behaviour oscillates or pulses between points on a range. We are not fixed types but each of us modulates our behaviour – with greater or lesser energy – across a range that may be narrow or broad.

The post-Jungian’s awareness of range in behaviour is the crucial innovation when applied back to Psychological Theory of Types and early systems like MBTI based upon it. Now we can see that what had previously seemed a worrisome weakness – individuals’ refusal to behave according to fixed type – isn’t a weakness at all. As healthy individuals we all pulse through ranges of behaviour, across the whole spectrum of our social relations.

In fact our concepts of mental health are all based around definitions of human ability to inhabit the fullest range of communication available to us. We describe people stuck at extremes of the range and unable to exercise such normal modulation as either “withdrawn” or “hyperactive.” Diagnosis of variants of autism such as Asperger’s syndrome is based upon the individual’s ability to perceive the needs of others, and to vary his or her behaviour according to the social context. In this light, rigidly inhabiting a fixed point of interaction is a sign of disease.

In other words, our definition of wellness in the social space is measured by our ability to exhibit an appropriate range or spectrum of behaviours between known limits. Bandwidth – the ability to reach out across a broader “comfort zone” of any given behaviour – is one of the attributes for success in social terms. And in the classical context of rhetorical training, we know the ability to surprise listeners by reaching out, both delights and convinces them.

So all our training shows range – and not rigidity – is a key life success factor.

For example, a person who always appears hyper-individualist and withdrawn will experience social rejection if this is his only mode of expressing collaboration. Yet if he has sufficient bandwidth to also show more team-spirited endeavour, he will quickly build trust and his individualism trait will be respected as “just part of his nature.”

Likewise empathy can be shown in a variety of ways by an individual with reasonable range. If he meets with friends who are supporters of a football team that has just lost to the team he supports, he might extend ironic funeral condolences as a friendly gesture. But at a real funeral, he would exhibit a very different kind of empathy to family members of a work colleague who has died.

Awareness of behavioural range is an important element in the Communicate Charisma methodology. It addresses the core criticism of systems based on earlier Jungian thought, that individuals simply don’t conform to the rules rigidly imposed by 16 character types.

This is a key differentiator, as to our knowledge there is no other psychometric testing tool embedding the concept of range. And when the three types of range are combined with five distinct energy levels for each of the seven dimensions, Communicate Charisma can map literally thousands of different behavioural patterns – confirming that each individual truly is unique.

As we’ve discussed in earlier articles, Communicate Charisma uses a two-dimensional Projection Profile and a seven dimensional Essence profile to offer an intuitive representation of any individual’s communications competency. The Plots are based upon responses to a simple lexical clustering test, completed online. The concept of range is central to both Plot representations. 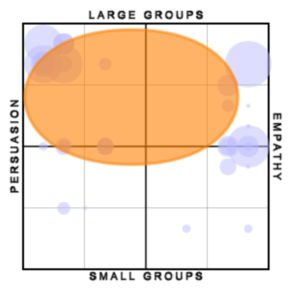 The Projection Plot is dominated by a square shape set along the crosshairs of the graphic. Individuals with broader range on the Persuasion-Empathy axis will find a horizontal egg-shape, while extra bandwidth between Large Group and Small Group appeal translates into an up-standing ovoid. So stretch indicates range. 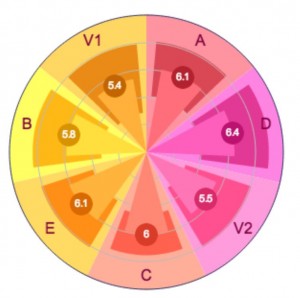 The pizza-style Essence Plot illustrated above incorporates range too. This circular Essence Plot comes from a collective intelligence  view of  how British entrepreneur Richard Branson would look.  The architect of the Virgin brand has quite high  overall energy levels for each of the seven dimensions by means of a fan emanating from the centre of the circle. This shows the highest and lowest energy attributes derived from the test result.

Additionally, each of the seven sectors has a second, broader coloured wedge shape indicating the range available to that individual. Those with broad range will show high levels of competency communicating in various modes, while those with narrow range may default to using the same communications strategy over and over again. Branson shows a broad range in four of the seven dimensions (Beliefs, Drive, Values, Vision).

The Projection Profile identifies him as a “Campaigner,”  being someone who is a cheerleader and team player, able to galvanise groups and shift perceptions by tirelessly pitching ideas or solutions.

The range concept is further detailed in the Dimension Details section that forms the heart of the Communicate Charisma Self-Assessment Report. A bar chart or histogram for each of the seven dimensions shows how the individual’s range across a spectrum of five behaviours, ranging from low to high energy. 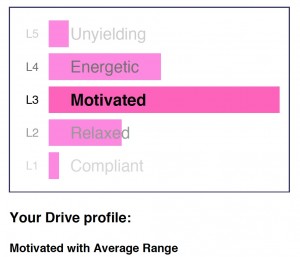 The Self-Assurance spectrum, for instance, runs from Reserved (lowest energy) through Discreet, Confident, and Assertive to Authoritative (highest energy). A person with broad range would be well with their comfort zone in accessing at least four of these communication styles. A person with narrow range would likely access just two. 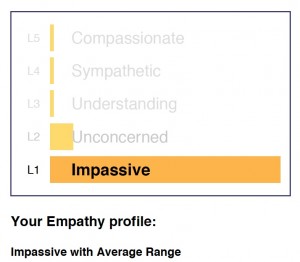 Here’s the profile of a person with an extremely low level of energy devoted to Empathy.

The Empathy spectrum runs from Impassive (lowest energy) through Unconcerned, Understanding, and Sympathetic to Symbiotic (highest energy). Again, a person with average range and median energy in Empathy would be within their comfort zone using styles from Sympathetic to Unconcerned. By contrast, a narrow range person accustomed to Compassionate behaviour would find it difficult or impossible to appear Impassive.

Communicate Charisma’s methodology has been designed to build upon those methods of psychometric testing whose general benefits have been demonstrated over many decades of use by millions of people. At the same time we have updated these methods to benefit from more modern research and fill what we have perceived as gaps.

The outcome is a very powerful tool for personal development in the field of communications competency, that we are confident represents a significant advance in metrics-based analysis.

You can read the first article in this series here

You can read the second article in this series here