The Bolt said it all.

For one billion people to recognize that a simple gesture of the arms now belongs indelibly to a single human being, is proof of triple-triple Olympic champion sprinter Usain Bolt’s extraordinary power to mobilize our hearts.

The 2016 Olympic Games may have just ended, but this and other visual signatures created by winners in Rio (or at earlier tournaments) form part of our collective perception of what it means to be a great and charismatic athlete in a made-for-TV era.

We will remember great victories for a while. But great gestures truly crystallize them forever.

This adds up to more than the simple observation that we define famous people not by words but by the gestures they make (Michael Jackson’s gloved hand, Winston Churchill’s ‘V’ sign, Mick Jagger’s leaps). For champions of the physical realm, such gestures encapsulate their charisma. 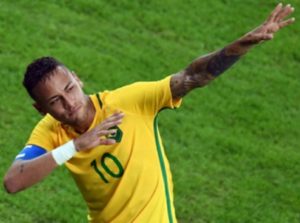 I was lucky enough to be in Rio for the first 10 days of the Olympics and saw plenty of medal ceremonies, plenty of athletes draped in national flags, plenty of tears, triumphs and disasters. In the athletics arena and the velodrome I witnessed victories measured in fractions of time too swift for my eye to perceive, while at the boxing, the fencing and synchronised diving I saw judges pick winners based on rules beyond my limited understanding. 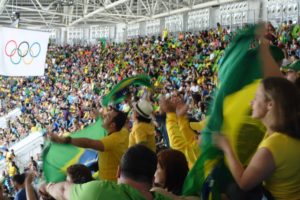 At the basketball and the beach volley I was swept up in the collective surge of Brazilian noise-making, and I roared support for Polish hammer-thrower Anita Włodarczyk who broke the world record twice in half an hour. We cheered Ethiopian steeplechaser Etenesh Diro who pressed on despite losing her shoe. These are all highly satisfying memories, yet not emblematic. 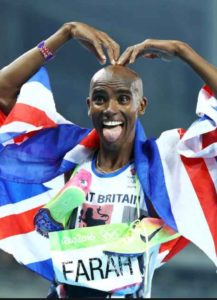 However, I was there to see Bolt reveal his extraordinary power by making one simple emblematic gesture before winning his 100M qualifying heat. The Engenho de Dentro athletics stadium was hardly packed – all of the events I went to still had empty seats – but the crowd made a huge eruption of anticipatory sound when Bolt emerged from the tunnel.

Before settling into his starting blocks, Bolt laid a hand to his lips, instantly silencing a crowd of 25,000. From my position in the stands, I could only see this on the big screen. But it was far more effective than a huge sign saying: “Quiet please; genius at work for the next 9.8 seconds.” We obeyed. 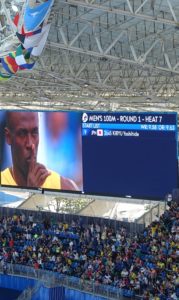 “Quiet please: genius at work for the next 9.8 seconds.”

In later heats, Bolt deployed his ascending scale of charismatic gestures (touching his heart and smiling to the camera as he crossed the line), before using The Bolt gesture after each of his three finals.

So what are we humble mortals to make of this, and what’s the take-way for those hoping to make their sales presentation less humdrum?

Athletes are most effective at mobilising our emotions where they DON’T use formulaic gestures. They don’t show their muscles. They don’t reprise their winning strokes. They don’t relive the positive agression that brought them victory.

Diversity and uniqueness of gesture, rather than predictability, is what wins us over. Authenticity is everything.

This runs directly contrary to the teachings of those practitioners of charisma leadership tactics who teach would-be conference speakers that standardized gestures (arms akimbo, outstretched arm above head-level, ‘Wonder Woman’ pose) will surely impress audiences. Not if others have been taught the same tricks.

Gestures count, yes. But they must be uniquely our own gestures – not borrowed. Charisma comes from the heart – not from a manual.